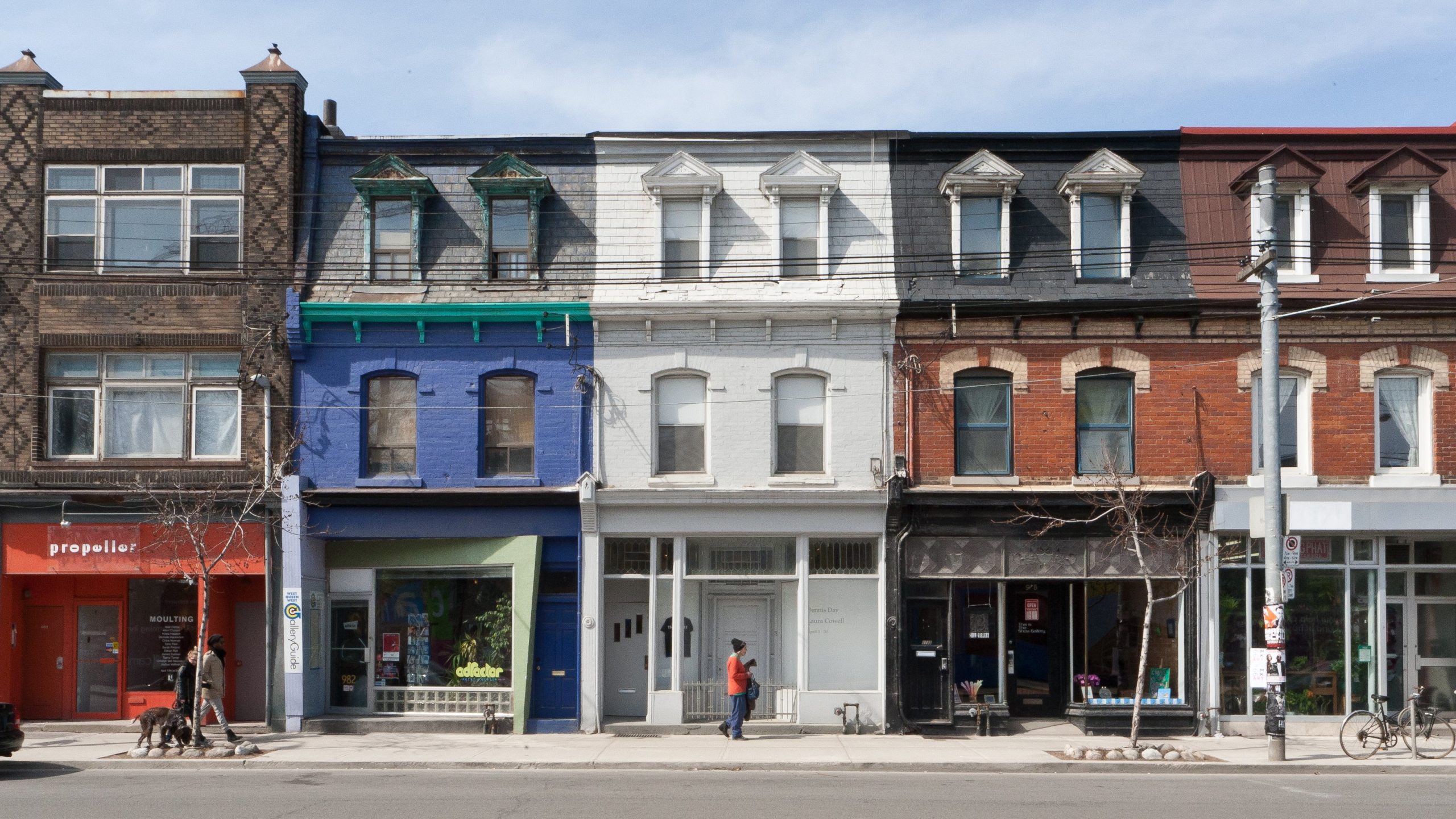 West Queen West is one of Toronto’s most popular neighbourhoods, home to hip coffee shops, restaurants and bars, trendy retail and the largest concentration of art galleries in the city. It’s quite a different scene from when Artscape first moved into the area in 1995! We take a look back at how the arts community has grown in West Queen West over the last two decades and how Artscape has grown along with it.

The arts scene in West Queen West took root in the early 1980s as artists began to leave Queen and Spadina in search of cheaper rents, venturing westward past Bathurst and out to Parkdale. A neighbourhood in decline since the 1960s, West Queen West had a reputation for drug problems, poverty and petty crime. The departure of industrial manufacturing to the suburbs left behind many vacant warehouse buildings which soon evolved into informal artist colonies. Since the buildings were not zoned for residential occupation, these artist live-work studios were illegal and often a potential fire hazard.

The creation of 900 Queen West was a significant catalyst in the revitalization of Queen Street west of Trinity Bellwoods Park. Soon after, the Candy Factory Lofts project was launched across the street, as well as the Chocolate Factory Lofts just to the east. Jamie Angell, Katherine Mulherin and other creative entrepreneurs began setting up shop, triggering an influx of galleries, cafes and specialty retail.

Further west in Parkdale, Artscape got involved with a project to save an old police station and give it new life as a community arts and cultural hub. In 1998, the Parkdale Arts & Cultural Centre opened at 1313 Queen St. West with offices for social service organizations and local business associations, nine artist live-work studios and Gallery 1313, a prominent artist-run centre.

“When Gallery 1313 opened, we were one of the few galleries [in Parkdale],” recalls Phil Anderson, Director of Gallery 1313. “Now you have probably around 35 galleries along Queen Street West from Roncesvalles to Bathurst Street.”

The West Queen West neighbourhood experienced a significant boost in creative cache in the mid-2000s with the revitalization of The Gladstone Hotel and The Drake Hotel which—in addition to their boutique hotel and bar/restaurant operations—regularly host exhibitions, art installations, music performances and cultural events. By 2005, when the Museum of Contemporary Canadian Art moved in, the area had become the nexus of Toronto’s cultural scene.

The Drake Hotel during Nuit Blanche 2008. Photo by Matthew Blackett.

Inevitably, where artists go developers follow. The vibrant arts scene and resurgence in commercial activity in West Queen West created a rise in property values, making the land attractive for redevelopment. When the City re-designated an area known as the Queen West Triangle as a regeneration zone in 2004, developers quickly bought up the land and began the process of rezoning it to allow for significantly increased height and density.

This impending condo boom was immediately contentious not only due to the increase in density but because of the proposed demolition of 48 Abell, a former factory that was home to a community of artists living in illegal live-work lofts. It was clear that the development proposals would destroy numerous artists’ workspaces and irrevocably alter the character of West Queen West.

A spirit of activism took hold of West Queen West, led by a group of community members called Active 18 which included in their ranks many artists and creative workers. Active 18 embraced the idea of increased height and density but argued for better design and amenities, including the preservation of small-scale retail, public parks and production space for artists. They advocated for a development plan that reflected the needs of the community and preserved the unique character of the neighbourhood.

Based on the negotiations between Active 18, developers and the City, Artscape struck a deal to create 70 units of affordable artist live-work space and a rental gallery in a new condo building at 38 Abell Street. Artscape Triangle Lofts was a win-win-win outcome that paved the way for further collaboration between activists and developers.

Thanks to the efforts of its residential and artistic communities, West Queen West is now experiencing an arts building boom alongside its condo boom. In Parkdale, The Theatre Centre will soon move from the Great Hall to a permanent home at the Carnegie Library after 30 years of moving their headquarters. The Queen West Triangle will soon see the creation of two-storey Toronto Media Arts Cluster (TMAC) space in The Edge condos at Queen and Lisgar Sts; future tenants of the TMAC project already include Gallery TPW, Interaccess, and Charles Street Video. Nearby, a parking lot turned public park will feature not only green space but sculptural and multimedia installations.

Artscape Youngplace prior to renovation

On Shaw Street just north of Queen, construction is now underway at Artscape’s fourth building in West Queen West: Artscape Youngplace. This $13-million adaptive reuse project will repurpose the Shaw Street School, a formidable Beaux-Arts building that has served the community for 100 years, into a centre for the arts. The project will add 75,000 square feet of production, rehearsal and exhibition space for artists and organizations right in the heart of Toronto’s contemporary art scene.

“What our projects do is help provide focus for creative activity and make it more visible,” explains Tim Jones, Artscape President & CEO. “There are pockets of artists all along Queen Street West, but often they are tucked away off the beaten path. When you have a critical mass of creative people coming together, it provides a really solid anchor for the arts and the community.”

Manifesto installs their Inside Out project on the hoarding at Artscape Youngplace during Nuit Blanche 2011.

Over the past 15 years, a number of catalytic projects in West Queen West have helped transform a downtrodden area into one of the most dynamic contemporary art, design and nightlife scenes in the world. Much of the art, music and style that is unique to Toronto is born in this now thriving area. “I take the view that communities are always going through change,” says Jones. “It’s important for community stakeholders to be active in the life of their neighbourhoods, to counteract negative things that are happening and work as a catalyst to make positive things happen.”

Aftermath, an exhibition by AGP tenant Stephen Andrews, at the McMichael Gallery

“When you look at my art, what do you feel compelled to do?” – Tahsin The Good

As you walk by Artscape Daniels Launchpad’s Hallway Gallery, you can’t help but be drawn…