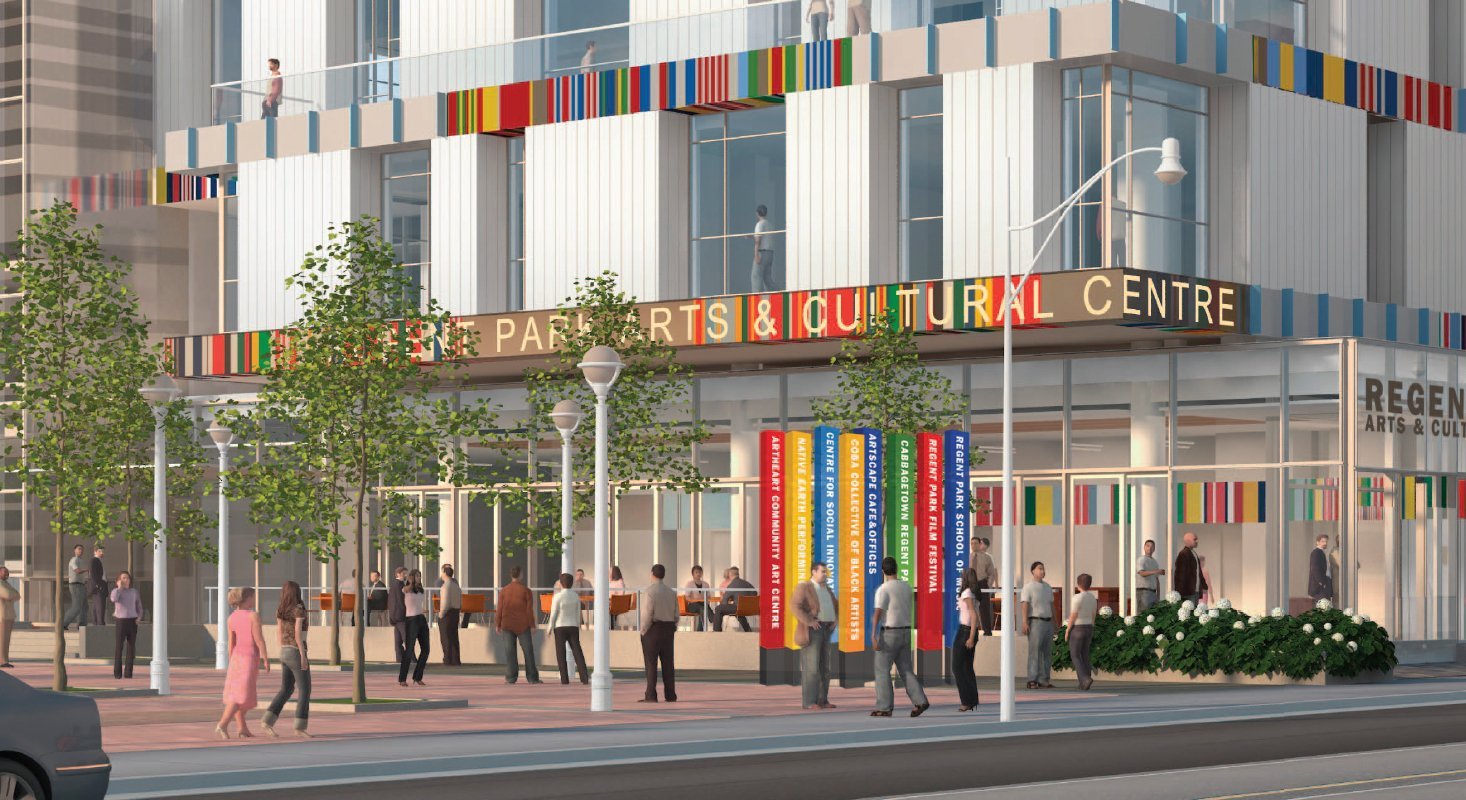 On the evening of Thursday, November 29th, the Artscape Foundation together with Presenting Sponsor The Daniels Corporation hosted Under One Roof, an event to raise funds for Daniels Spectrum: a cultural hub in Regent Park. Over $350,000 net was raised for capital and programming needs, successfully capping off the $10 million campaign goal for the centre.

The Daniels Corporation took a leadership role in reaching out to building industry colleagues to lend their support for the centre at Under One Roof. Over 300 people gathered for performances by some of Canada’s leading musical and dance talent, including Juno-nominated performers Jackie Richardson and Sterling Jarvis, multidisciplinary artist Anne-Marie Woods (AKA Amani), local talent from spoken word artist Mustafa Ahmed, and Daniels Spectrum tenants COBA Collective of Black Artists and Regent Park School of Music.

“The generosity that The Daniels Corporation and leaders in the building industry have shown tonight has helped us meet the $10 million fundraising campaign goal for Daniels Spectrum” said Robert J. Foster, Chair of the Artscape Board of Directors. “We are deeply honoured to be the beneficiary of this incredible event. These funds will allow us to complete the capital investment in Daniels Spectrum and ensure it is sustainable over the long term.”

“Daniels Spectrum was created to showcase the vibrancy of Regent Park and to celebrate the people of Toronto who have embraced this cultural hub and given it life.” said Martin Blake, Vice President of The Daniels Corporation.  “It is an honour for Daniels to play a leadership role within the revitalization of Regent Park and continue to contribute to this vibrant community.”

Performances during Under One Roof featured a trilogy of songs composed by Daniels’ President, Mitchell Cohen, that tell a story of some of the significant milestones that have taken place throughout the Regent Park revitalization. The Daniels Corporation’s Give A Gift Get A Song initiative will soon enable individuals to purchase the trilogy with proceeds supporting future programming at Daniels Spectrum through the Artscape Foundation. www.giveagiftgetasong.com

The Artscape Foundation, a registered charity, is responsible for fundraising initiatives at Artscape. Currently, Artscape Foundation is raising funds for Artscape Youngplace, a 75,000 square foot community cultural hub in the West Queen West neighbourhood that repurposes the historic Shaw Street School as well as the ArtSpark Program that supports programming initiatives for Regent Park youth at Daniels Spectrum. www.torontoartscape.org

The Daniels Corporation(www.danielshomes.ca) is one of Canada’s preeminent builder/developers with a reputation for quality and integrity in all forms of residential construction. Named the Tarion Warranty Corporation’s 2012 High Rise Builder of the Year and the recipient of the 2012 Toronto Arts and Business Award presented by the Toronto Arts Foundation, Daniels has built more than 23,000 homes throughout the GTA.  Daniels was chosen to partner with Toronto Community Housing to revitalize Regent Park—69 acres in Toronto’s Downtown East. Committed to community, Daniels champions neighbourhood initiatives that enhance residents’ quality of life and supports numerous charities and non-profit organizations.

We're pleased to announce a number of developments in our Artscape Weston Hub project. Browse…

Artscape Daniels Launchpad is set to come alive with beatmakers, producers and recording artists as…