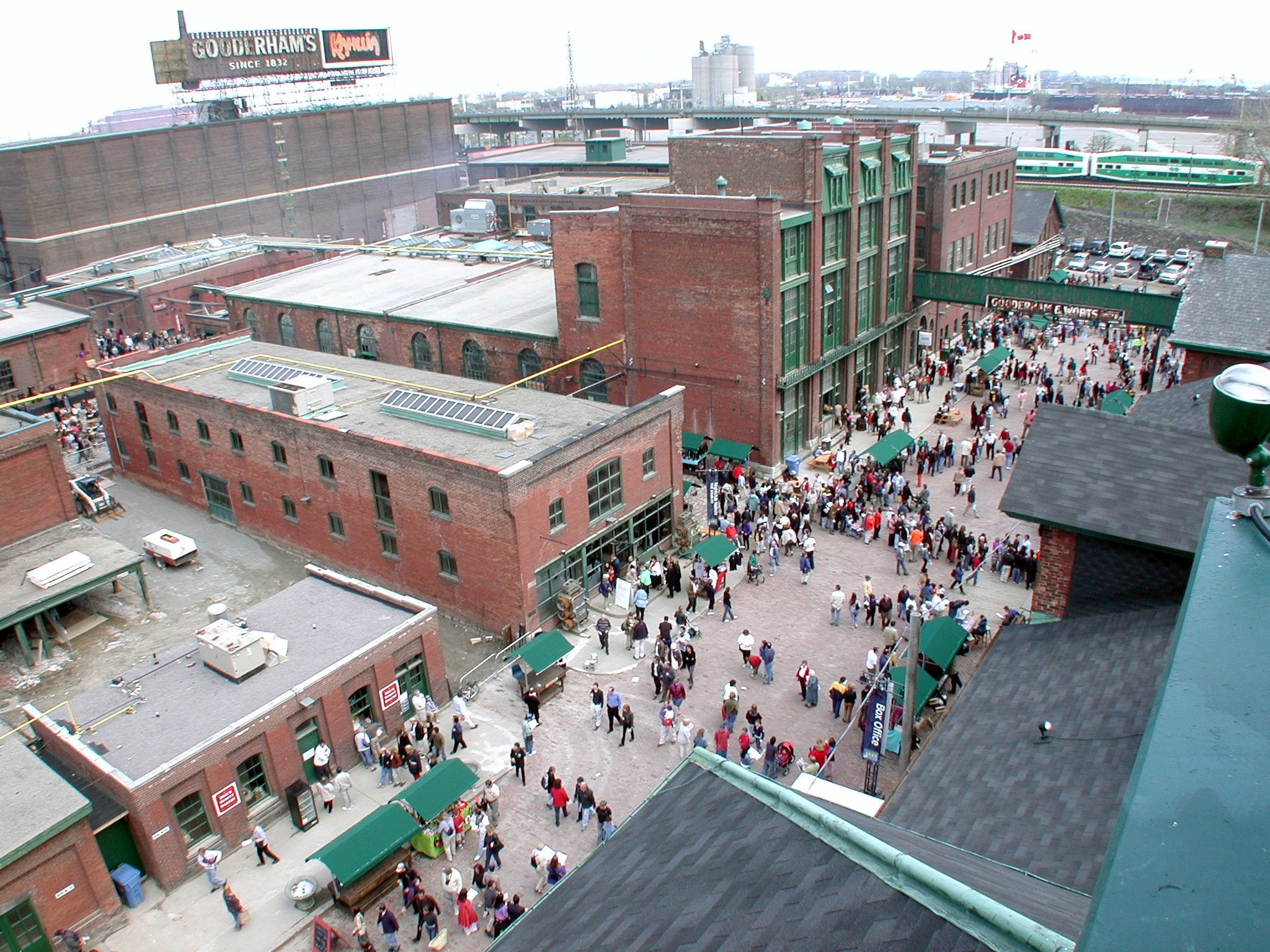 Among Toronto’s many eclectic neighbourhoods—some renowned for shopping, entertainment, business, or cultural offerings—few rival the Distillery Historic District for combining all of those into one charming package.

Once a Victorian industrial complex producing, you guessed it, booze, the neighbourhood today is a National Heritage Site that has been painstakingly restored and redeveloped. The area now boasts a stimulating mix of shops, art galleries, restaurants, theatres, a brewery, artist studios and a number of condominium towers.

While no tourist’s visit to the city is complete without a stroll down these picturesque brick-paved streets and alleys, the citizens of Toronto are the real winners: they can afford to spend days, weeks, months or years exploring every nook and cranny.

One of the nooks that many people may have overlooked is the Case Goods Warehouse, part of Artscape’s Distillery Studios. The building houses studios for over 50 artists, makers and craftspeople, including 10 retail studios on the ground floor.

Robert Akroyd has had a studio space there for nearly ten years, Akroyd Furniture. He agrees that the Case Goods Warehouse can sometimes fly under the radar. “I have people, still, who come in and say: ‘I’ve been coming down here since Balzac’s [Coffee] first opened in the fall of 2002’ and they’ve never been into this building.” Boy—they do not know what they are missing!

Akroyd studied fine art, painting and sculpture, but like many artists he soon needed a day job to help make ends meet. Lucky for him, he also found a calling: making furniture. Today, Akroyd applies his training as an artist to the job of creating some of the finest custom furnishings available in Canada.

He has maintained his own furniture studio since 1997 and has been located in the Distillery District since 2003. He jumped at the opportunity to set up shop in the Case Goods Warehouse, in a historic building painstakingly restored by Artscape.

“The Distillery District has a kind of village feel to it,” says Akroyd. “I love the historical nature of the buildings. I love to be down here in February after a dusting of snow when there are no footprints.”

Akroyd was also sold on having an integrated workshop and retail space. “This way, it allows me to wear both hats—sometimes I’m in clean clothes in the shop, sometimes I’m in shop clothes in the retail space,” Akroyd says with a laugh. “However discordant those two worlds may be, having the two [spaces] adjacent one another works!” Another fringe benefit is that potential customers can see the scale and type of work that Akroyd and his team are doing, hand-building one or two pieces at a time.

Goldsmith and maker of custom jewellery and metalwork, Leif Benner, would tend to agree. Benner studied goldsmithing and metalwork at George Brown College. After graduating, he spent a few years as an artist-in-residence at Harbourfront Centre and did the arts and craft show circuit. “That experience [helped me] figure out my voice as a maker,” says Benner. “And then the timing was perfect: my contract at Harbourfront was up just as Artscape was developing this building.”

He’s occupied one of the other retail studios in the Case Goods Warehouse for ten years. “I love it here,” Benner says. Part of the reason he jumped at the opportunity to set up in the newly redeveloped Distillery District was that its character had yet to be totally defined. “I wanted to be in a neighbourhood where I wouldn’t be known as ‘The Yorkville Jeweller’, I wouldn’t be ‘The Beaches’ Jeweller’,” says Benner. “And with this neighbourhood, because it hadn’t really been developed, it was an opportunity for me to transcend that.”

Beyond his own work, Benner gets excited about all that the Distillery District has to offer. “The entire spectrum [of jewellery] is represented here,” Benner says. He’s right—the neighbourhood has attracted an inordinate number of handcrafted jewellery and fashion shops since he moved in a decade ago. And then there is the food: “There’s amazing food! Balzac’s Coffee, the chocolate at Soma, Brick Street Bakery,” Benner says. “You can spend an entire day here and eat like a king.”

Know an artist or maker that would like to join the community at the Case Goods Warehouse in the Distillery Historic District? One of the retail studios is available April 1, 2013. Applications are being accepted until January 31, 2013. Click here for more details.

Artscape Distillery Studios is where the holiday magic happens

Dear Artscape Community and friends, I’d like to provide an update on how Artscape is…