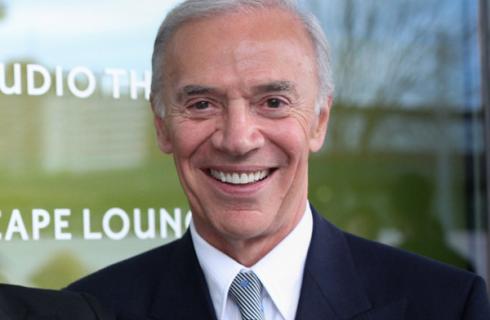 Congratulations are in order for Robert J. Foster, Chair of Artscape’s Board of Directors, who has recently been named co-recipient of the Rita Davies and Margo Bindhardt Cultural Leader Award. The award was presented by the Toronto Arts Foundation at The Mayor’s Arts Lunch on June 27, 2013. Robert shares the award with Che Kothari, the Founder and Chair of Manifesto Community Projects, who is a collaborator and friend of Artscape.

“There are few people in Canada who can match Robert’s drive and passion for the arts and for this reason we believe he is truly deserving of this honour,” said Tim Jones, Artscape’s President & CEO.

Robert is a private businessman with passion for the arts: he is Founder, President & CEO of Capital Canada Limited, a Bay Street financing firm, and has served on or Chaired a broad range of over 30 not-for-profit Boards of Directors. Robert is also currently Vice-Chair of Business for the Arts and serves on the boards of Luminato, the Harbourfront Foundation and The Mayor’s Task Force for Arts and Theatres.  On many nights of the week he can be found at performances and fundraising events for organizations ranging from The Canadian Opera Company to Manifesto.

In 2011, Robert was tapped to Co-Chair the Creative Capital Advisory Council with Karen Kain, the National Ballet’s Artistic Director and Jim Prentice, former senior Minister in the federal cabinet and current Vice Chair of CIBC. This group brought together the cultural and business sectors to strategize about Toronto’s future as a leading Creative City, and led the development of a report titled, “Creative Capital Gains: An Action Plan for Toronto”.

This report, developed in consultation with over 300 of Toronto’s arts and culture stakeholders, has served as a guiding document for Toronto’s cultural growth policy since its public release in May 2011. It bears noting that the Action Plan was unanimously adopted by Toronto City Council after Robert and then City of Toronto Executive Director of Culture Rita Davies visited with every one of the City’s 44 Councillors. Two years later, Toronto City Council unanimously approved a bold new culture plan and the most significant increase ever to city arts funding amounting to an additional $17 million per year when fully implemented.

Mitchell Cohen, President of The Daniels Corporation and fellow member of the Artscape Foundation Campaign Cabinet with Robert Foster at the Daniels Spectrum Opening Night Party.

Robert Foster has had a profound impact as Chair of Artscape and Co-Chair of its Campaign Cabinet, which has recently raised more than $13 million in support of  Daniels Spectrum, the new cultural hub in Regent Park which opened last fall, and Artscape Youngplace, an arts and community centre in the heart of West Queen West that will open in the coming months. We thank Robert for his tireless efforts and applaud his leadership in making Toronto a better place for everyone through the arts.