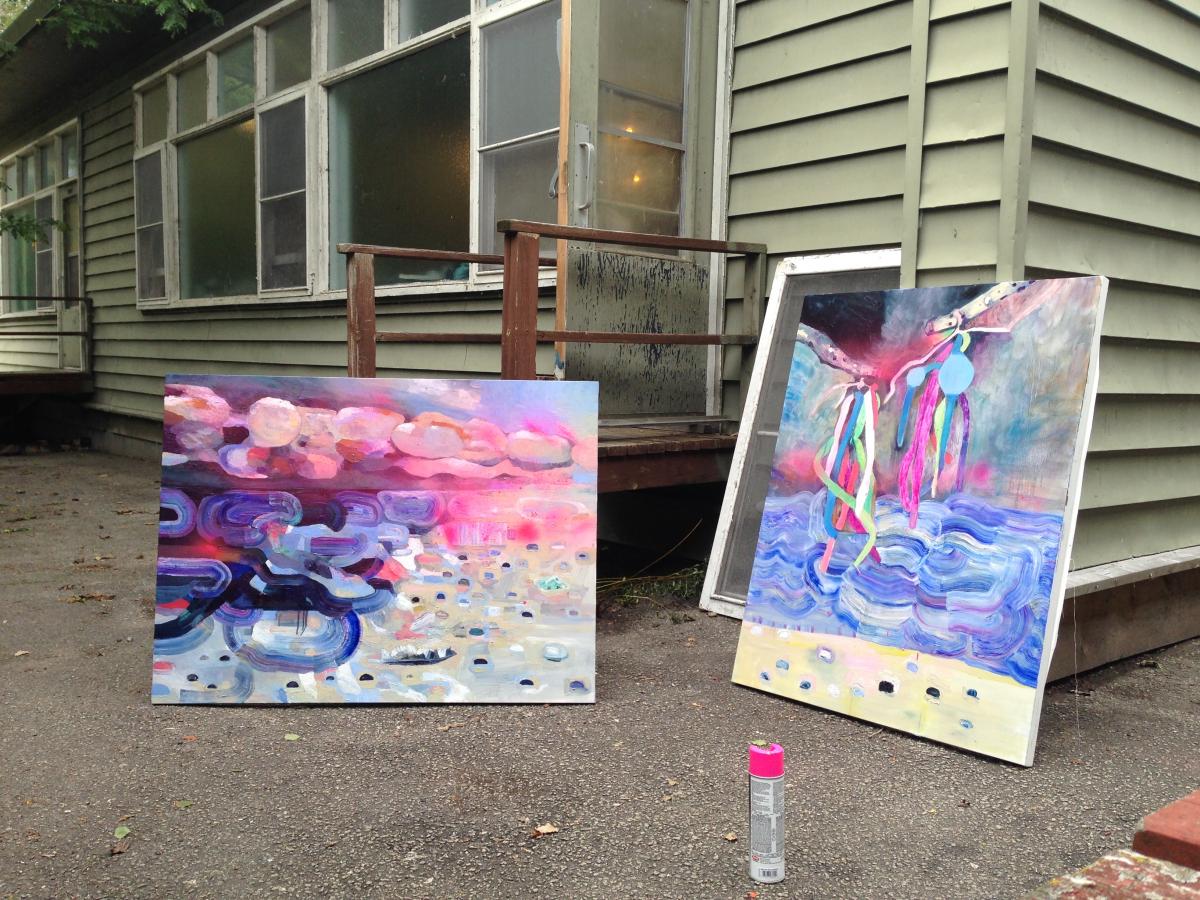 This summer, we were proud to sponsor the first ever Artscape Award at the Toronto Outdoor Art Exhibition (TOAE), the annual art fair that takes place outside City Hall. The prize? A one-week artist residency at Artscape Gibraltar Point followed by a solo exhibition in the Artscape Youngplace Hallway Galleries (value $2,175). Out of more than 350 artists, TOAE judges selected abstract painter Julie Gladstone for the honour. We spoke to Julie about winning the award, creating and exhibiting her work at two of Artscape’s cultural hubs and what this means for her career as an artist.

Just receiving the award turned out to be an adventure. Julie was sitting at her booth in the middle of Nathan Phillips Square when she spotted a 10-piece marching band coming up the aisle in full regalia. It stopped in front of her tent and a crowd gathered. Suddenly, a man with a megaphone jumped out and yelled, “Julie Gladstone, you’ve won the Artscape Award!” She was then whisked inside City Hall for a cocktail reception for award winners hosted by none other than Mayor Rob Ford. She got a photo, of course.

In early September, Julie shipped out to the Toronto Islands for a week-long stay at Artscape Gibraltar Point. Set in a nature reserve just a ten-minute ferry ride away from Toronto’s downtown, the residency centre turned out to be the perfect place for Julie to tap into her creativity—her abstract landscapes typically investigate the intersection between the natural and urban worlds. Her quiet studio overlooked the garden and was a short walk from the beach. There, she found inspiration in the striking views of Lake Ontario and the bits of organic and manmade materials that turned up on the shoreline: bird feathers, bits of plastic, deflated balloons hanging from a tree.

Working in a community of artists also had its benefits. One evening when she got up for a midnight snack, Julie ran into Montreal-based artist Jamie Ross in the shared residency kitchen. They began discussing their work and discovered a similar thematic sensibility. He invited her to participate in an art project called Phantasmagoria 5, a nighttime bike excursion along the Humber River with performances, stories and installations by nearly a dozen artists, including long-term AGP tenant and puppeteer Jamie Shannon.

On September 18, more than 100 guests attended the opening reception of Julie Gladstone’s solo show at the Artscape Youngplace Hallway Galleries, a new public exhibition space that spans three floors of corridor space in the converted school building. Over thirty paintings from 2012 to the present were on display across the entire third floor hallway, ranging from large-scale works to her recent foray into miniatures. Julie exhibits regularly with Walnut Contemporary, a Toronto-based commercial gallery specializing in contemporary art. She is also looking for new gallery representation and the exhibition and reception were a prime opportunity to invite interested galleries to view her work.

Though the Hallway Galleries are not a typical exhibition space, many guests commented at the opening her paintings had never been lit better. Pieces from her The Sky is Falling series as well as new works from her residency at Artscape Gibraltar Point incorporate playful candy colours and sprays of vibrant pink but conversely have a sense of quiet foreboding. The morphing grids and checkerboards of Metaphysical Cartography, especially the oversize canvas Snakes and Ladders (2012), echo both antique quilts and aerial views of the cityscape.

2014 has turned out to be an amazing year in Julie Gladstone’s career as an emerging artist. Earlier this year, she was awarded a Toronto Arts Council grant which helped her produce a portion of her work presented at TOAE. She was recently selected to exhibit at the Tallahassee International Juried Art Exhibition at the FSU Museum of Fine Arts in Florida. We’re thrilled that the Artscape Award was able to further enhance her growing reputation as a contemporary Canadian artist and provide the opportunity for inspiration and future collaborations.

Allison Rowe’s project for her Winter Island Residency is all about seasonal joy, community and…