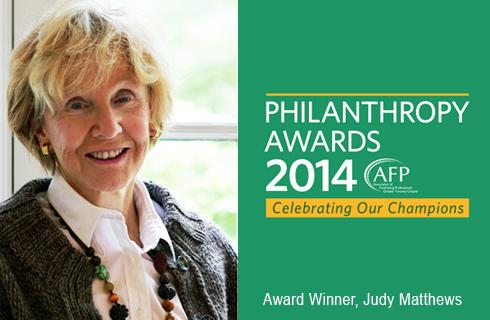 We are very pleased to announce that Judy Matthews has received the Outstanding Volunteer Fundraiser award from the Association of Fundraising Professionals after a joint nomination from Artscape, Evergreen and Park People. Judy Matthews is nothing less than a champion for the role not-for-profit organizations play in strengthening the social fabric. She wins this award because she has supported and encouraged the arts, education, city and community building by generously donating her time, effort and personal finances to countless local and national initiatives.

Judy Matthews holds a long-standing interest in small and large scale urban renewal projects that emphasize creativity, beauty and greener more inviting spaces. She first became interested in civic initiatives in her early twenties. She honed her professional expertise by pursuing an M.A. in Urban Planning at York University and working with the City of Toronto. Judy has since contributed to an impressive variety of initiatives that have enriched Toronto and the lives of many Torontonians. Her catalytic leadership has benefitted projects ranging from the anti-Spadina  Expressway campaign (1960s), to the award-winning revitalization of St. George Street (mid-1990s), development of the $30 million Open Space Master Plan at the University of Toronto (late-1990s), and the creation of a pedestrian piazza and the Music Garden at Harbourfront (1990s and 2000s).

Judy is a dedicated and experienced volunteer who strongly believes in the role not-for-profit organizations play in civic life. She has contributed her time and expertise to countless local and national organizations, with a particular focus on the arts, education and building a more humane community. Examples of organizations that have benefitted from Judy’s involvement include Creative Trust, The National Arts Centre, Toronto Community Foundation, The United Way and People Plan Toronto.

More recently, Judy has been directing her energy toward an assortment of cultural and city-building organizations namely Artscape, the Canadian Opera Company, Park People and Evergreen. Her organizational and networking skills, strategic focus, infectious enthusiasm and generous personal donations have significantly expanded the reach and fundraising ability of these groups. Motivating contacts from across her networks, in just over a year Judy played a critical role in achieving Artscape’s $10 million fundraising goal for the Daniels Spectrum cultural hub in Regent Park.  Her ongoing support for the Canadian Opera Company has allowed the public-at-large to attend free noon-hour concerts throughout the year. She injected leadership and organizational ability into helping Park People develop their strategic Master Plan and build partnerships with major funders. Looking ahead, Judy’s passion for integrating nature into the built environment has inspired her to help Evergreen develop a beautiful ribbon of green which will wind down through the city, connecting many neighbourhoods along its path.

Judy is deeply motivated by a desire to improve the common good, and there is no question she has successfully leveraged her values and professional training into achieving this goal. As her unique approach continues to inspire other people to increase their giving, her work will also continue to increase the city’s livability to the benefit of all of us.

Artscape is hugely proud to have Judy Matthews on its team of senior volunteers and thanks her for her extraordinary efforts in raising funds for our projects, notably Daniels Spectrum and Artscape Youngplace. Judy’s skill, guidance and influence have expanded Artscape’s confidence, ambitions and horizons for evermore. We congratulate her on this honour that recognizes her remarkable determination, commitment to city-building and support of charitable organizations through her gifts as a fundraiser. She will be honoured during a luncheon on November 27.

We are very pleased to announce that Daniels Spectrum has received another award, this time from…

Space matters. Where we live, work, and experience community have profound impacts on our quality…

Any artist, creative or designer looking to get into robotics can learn the fundamental concepts…