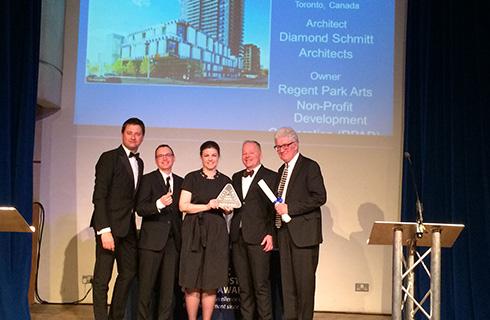 We are very pleased to announce that Daniels Spectrum has received another award, this time from the Civic Trust Awards based in London, UK. The Civic Trust Awards are the longest standing architectural and built environment awards scheme in Europe. They recognize the best in architecture, urban design, planning, landscape, public realm and public art.

This award, recognizing Daniels Spectrum for its positive social, cultural, environmental and economic benefits to the local community, was presented to Diamond Schmitt Architects, who designed the building, at a gala ceremony with 400 attendees at the Globe Theatre in London on March 6, 2015. Artscape CEO Tim Jones (second from right) was in attendance to receive the award on stage with our project partners at Diamond Schmitt Architects.

“What makes the UK Civic Trust Award for Daniels Spectrum so satisfying is that the criteria are based on community response, on users proud of their achievements and promoting their centre as an exemplar to inspire others. It is also satisfying to be one of the only two projects given Civic Trust Awards in all of North America and four outside the UK,” says Don Schmitt, Principal of Diamond Schmitt Architects (pictured at right).

The Civic Trust recognition is the third international award for Daniels Spectrum. It is further evidence that when partners like Daniels, Toronto Community Housing, Regent Park residents and other stakeholders come together around a shared vision, we have the power to turn heads around the world.

Canadian Architect published the official press release from Diamond Schmitt Architects on March 10, 2015. It contains background information on the award and a link to our “making of Daniels Spectrum” video.

Artscape has grown and evolved significantly over the last few years. In order to better…