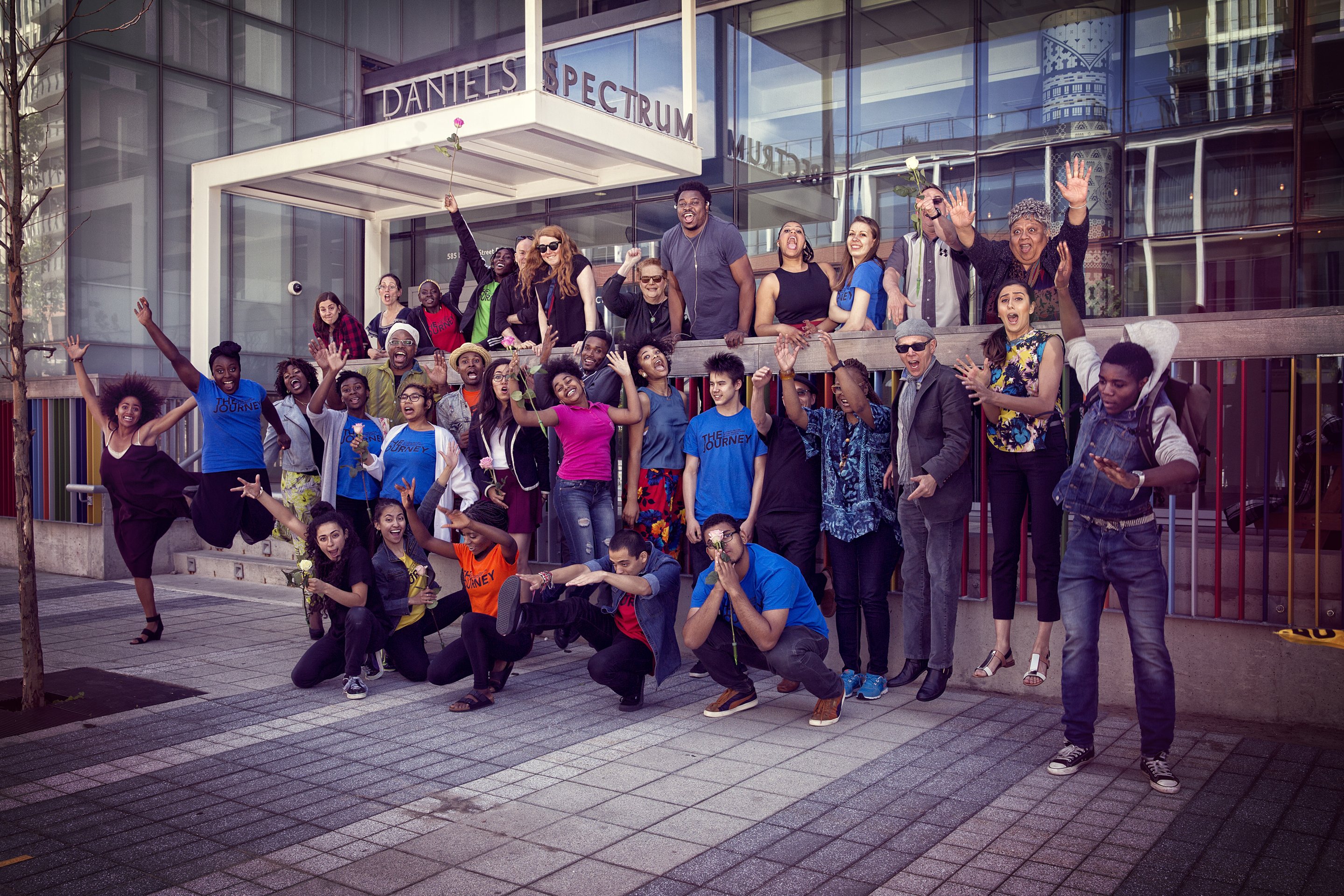 Artscape was thrilled to celebrate the creative talents of the Regent Park community during a week of rehearsals and sold-out presentations of The Journey from June 17 to 20! In development for over a year at Daniels Spectrum and involving a strong youth arts mentorship component, The Journey is a musical based on the stories of local neighbourhood residents, and a “living history of the Regent Park revitalization.” We are proud to share this recap of our incredible week!

The Journey production marks a unique collaboration between urban development leader The Daniels Corporation, Artscape, and a host of fabulous sponsors who came together to make this show happen. Artscape expresses its utmost gratitude to gala Presenting Sponsor Innocon and their friends at Lafarge, as well as June 19 and 20 Community Sponsor RBC. Our special thanks go to Creative Director Anne-Marie Woods, Musical Director Henry Heilig and the sensational cast and crew of The Journey that includes local stars Britta B, Trevlyn Kay and Steve Harmony performing alongside veterans like jazz legend Jackie Richardson, actor Jeremiah Sparks, gospel singer Lisa Henry and pianist Thompson Egbo-Egbo.

We are overjoyed by the success of The Journey 2015! We extend our sincere thanks to all who attended, sponsored and helped make The Journey project happen. We hope you’ll come back to Daniels Spectrum soon to access the creative programs and services offered by the organizations that call the hub home, and we encourage you to keep up to date on what’s on through our website, Facebook page, or Twitter and Instagram accounts.

In a show with this many moving parts, (The Journey runs the gamut from spoken-word solos to full song-and-dance numbers with cast, dancers, and a youth choir sharing the stage), there are months of rehearsals that culminate in a week of intense, all-hands-on-deck run-throughs.

Getting the steps just right in dance rehearsal

The Journey’s first audience was composed of students from Lord Dufferin Junior & Senior Public School and Nelson Mandela Park Public School. The students, grades 5-8, were dancing and clapping along in their seats to show-stoppers like “Dancing Down the Avenue” and “Jammin’ at the Party.”

Journalist Catherine Porter of the Toronto Star was also on hand for the performance, and described the scene: “[The students’] excitement was contagious — how cool to go to a theatre in your neighbourhood and hear stories about your home, told by neighbours! … Who wouldn’t want all of this for their community?”

When the show was over, the kids stuck around to participate in an enthusiastic Q&A session with some of our youth cast members, where they demanded details about everything from who inspired the actors to get into theatre to how long it took to rehearse a song.

If this photo had sound, you’d hear how lively this audience was!

“Jammin’ at the Party” got this crowd clapping and singing along

On the evening of June 18, an audience of over 300 supporters of Daniels Spectrum and great friends of Artscape and The Daniels Corporation came together for a special gala presentation that raised $612,000 to support capital improvements, operations and youth arts programming at Daniels Spectrum. Featuring pre-show cocktail reception with entertainment by The Tabla Guy, catering from Paintbox Bistro, and a lively post-show reception, the gala event saw a cross-section of the development industry and notable city-builders demonstrate their support for Daniels Spectrum’s mission and programming. Huge thanks to Presenting Sponsor Innocon, who have taken the lead on sponsoring this event for three years running.

Above all, The Journey is a story of Regent Park, and we celebrated the local community with a very special and completely free event on June 19, thanks to Community Sponsor RBC.

Our audience packed into the Artscape Lounge at Daniels Spectrum and outdoor patio before the show to enjoy entertainment and refreshments from the Regent Park Catering Collective. An electrifying performance was introduced by Daniels Spectrum Outreach and Programs Coordinator Lisa Smart and artist Kamilah Apong, who welcomed the crowd to Daniels Spectrum: “This is a space for you, for your friends, and for your family – let’s be sure to keep Regent’s voice alive here always.”

Curtis Hitsman, Regional VP Toronto Downtown for Community Sponsor RBC, also spoke before the show, cheering a performance that “celebrates those who bring this community to life.”

It was clear that the local audience connected strongly with certain parts of the show, even breaking into applause to acknowledge sentiments that hit close to home and local heroes recognized in the dialogue.

A post-show celebration gathered the community under a beautiful sunset in the MDC Partners Courtyard, with an Iftar feast from the Regent Park Catering Collective and entertainment from Unbuttoned and Snooky Tynes Soul Express that kept people dancing into the evening.

Our pre-show reception to welcome guests

Introducers Kamilah Apong and Lisa Smart connect with the audience

After the show, guests stayed well into the night for Iftar feast and musical entertainment

The Journey took its final bow on June 20, with a public performance that saw the performers and musicians hit their stride in an outstanding and powerful show.

Painbox Bistro played host to a memorable after-party on Saturday night, celebrating the success of a project that was years in the making. Spirits were high, with spontaneous rounds of applause breaking out when the show’s creator Mitchell Cohen and star Jackie Richardson made their entrances.

Pre-show hanging out on the Daniels Spectrum patio

Find your seat–the show is about to begin!

After the show, the cast and crew celebrate at Paintbox Bistro

This year’s gala presentation of The Journey was made possible by the tremendous support of:

The community and public presentations of The Journey on June 19 and 20 were supported by:

The Daniels Corporation has generously donated the soundtrack of The Journey in their “Give a Gift, Get a Song” initiative. Participating is easy, and contributes directly to youth arts programming at Daniels Spectrum. For a minimum donation of just $15, you’ll receive as a free download the entire soundtrack (2015 edition), featuring the talents of local stars from the Regent Park neighbourhood and sensational Canadian stage legends! Donate Now!

As Britta B writes in one of her spoken-word pieces included in the show, “This Journey has so many stories.”

The show’s unique origins and The Daniels Corporation president Mitchell Cohen’s experience with the redevelopment project is a story in itself (“Developer gets lyrical about Regent Park”, Toronto Star, June 20, 2015).

The experience of the local rising stars who get a chance to represent their neighbourhood in front of a huge audience is another great story (“Q&A with Steve Harmony and Britta B“, Theatromania, June 18, 2015).

Some preferred to tell the story of how The Journey challenges stereotypes about the community (“New Musical Tells the Story of Regent Park”, METRO Toronto, June 10, 2015), and about the engagement between the seasoned pros in the cast and production team and the local youth, some making their stage début in the show (“Stage Preview: Regent Park history inspires a show”, NOW Magazine, June 17, 2015).

And then, of course, there’s the music, and the story of a show full of great performances coming together (Arts Report with Mark Wigmore, JazzFM.91, June 5, 2015).

Big news! The Photography Studio at Artscape Daniels Launchpad is now open and available for…

Daniels Spectrum damaged in fire May 30

On Wednesday, May 30, fire broke out within Daniels Spectrum in Regent Park. The building suffered…

Artscape is hiring an experienced Director of Marketing & Communications! Are you a natural leader and skilled in conceptualizing, developing and executing marketing campaigns in the arts and culture field? We'd like to hear from you! Apply by Aug 21: https://bit.ly/3jWbVxa

Are you experienced in delivering educational opportunities to creative communities? Check out this opportunity to bestow your knowledge upon the Launchpad community!

Keitha Keeshig-Tobias Biizindam, one of the muralists for the #MyLakeviewVillage construction hoarding, speaks to the importance of water, the rebirth of the former OPG site, and creating inspiration for our youth through art: https://bit.ly/2ZRps0I
@globalnewsto @Artscape

Tomorrow marks the final day in the #RunItBlack series, and we have R&B/pop/soul artist Tarafi Anthony streaming live from Artscape Weston! Thanks to those who have tuned in these past few weeks - if you haven't had a chance yet, don't miss Tafari on our FB/IG Live @ 6pm tmw!⠀