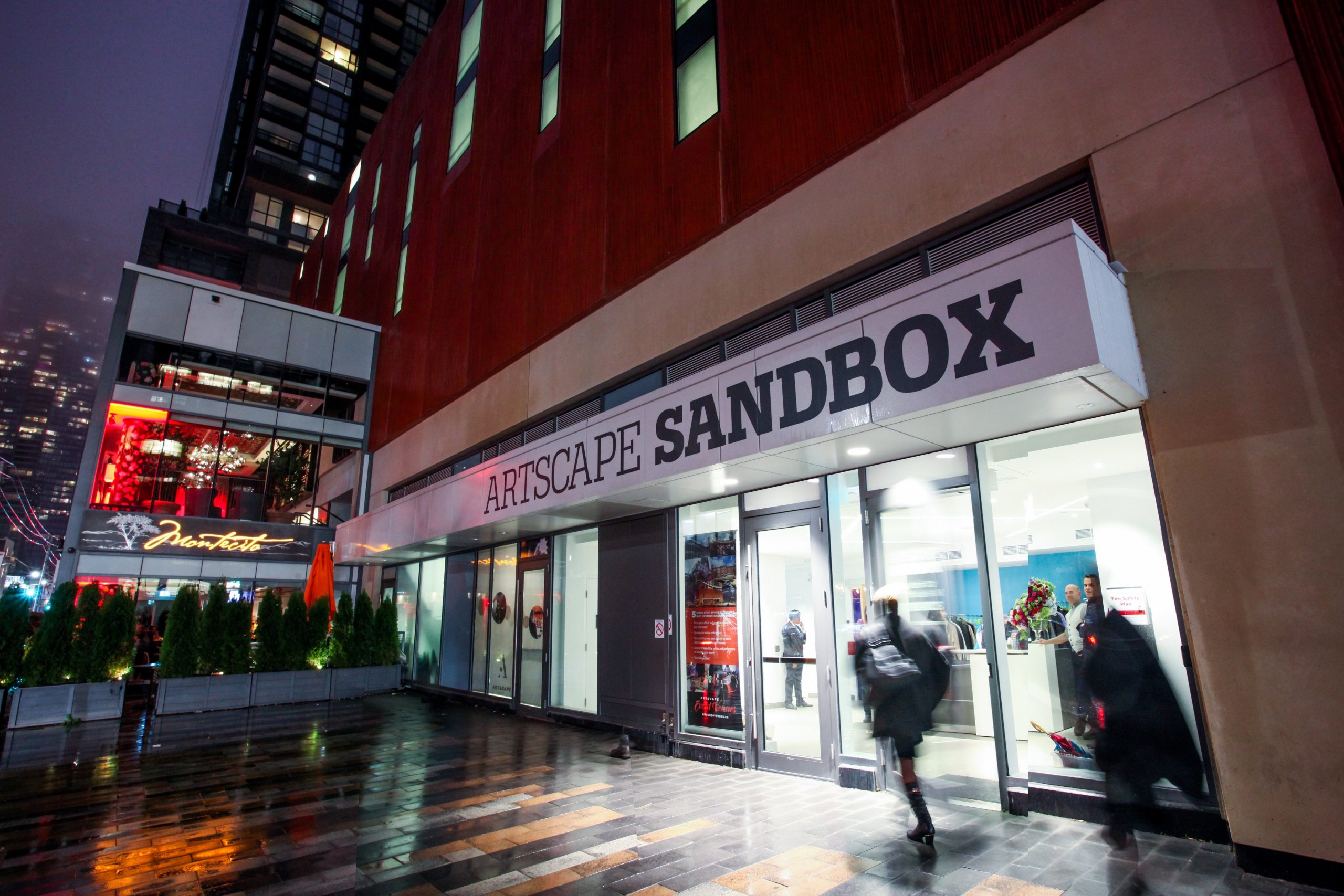 Artscape Sandbox, the newest project for creative placemaking organization Artscape, celebrated its official opening last night. A veritable who’s who in the arts and cultural sector, development industry, funding partners and municipal dignitaries attended, refusing to let a potential hurricane keep them away. They gathered to launch the 6,000 square-foot performance and event venue at 301 Adelaide Street West, which will serve as a much-needed affordable venue for artists, community members, grassroots groups and small organizations. Private and corporate groups can also support these vibrant community groups through the building’s social enterprise model, a win-win for everyone, which the evening’s speakers and performers conveyed. See the event photo gallery at bit.ly/sandbox-opening-gallery.

The evening, hosted by d’bi.young anitafrika (Artistic Director, The Watah Theatre), began with a reflective Indigenous welcome by Duke Redbird, and set of powerful performances curated by Mahlikah Awe:ri Enml’ga’t Saqama’sgw and featuring Coty Zachariah, Jennifer Alicia Murrin and Malakai Daybutch honoured the space’s roots as a gathering place of the Mississaugas, the Haudenosaunee, the Anishnaabe and the Huron-Wyndat Nation.

Artscape Sandbox, located in the heart of Toronto’s Entertainment District, was developed by Artscape with partners at The Daniels Corporation and the City of Toronto, funded in part by the Government of Canada and supported by a Community Advisory Committee, who helped shape the vision for the space. “As people in the real estate community are fond of saying: location, location, location,” said Artscape CEO Tim Jones. “We are thrilled to be able to make this space available right next to TIFF in the heart of the Entertainment District and we can’t wait so see how artists and others bring it to life.”

Artscape Sandbox is located within the podium of the Cinema Tower condominium residence developed and built by The Daniels Corporation. “We couldn’t be happier to see Artscape Sandbox come to life,” said Niall Haggart, Executive Vice President of The Daniels Corporation. “With Daniels Spectrum in Regent Park, Artscape and Daniels created a new destination on Toronto’s cultural map. Now we’ve created another. We’re all looking forward to the events and cultural offerings that come to life in this space.”

“Artscape Sandbox is an exciting new addition to our downtown community – it will not only provide creatives spaces right in the heart of downtown, but its social enterprise model will help ensure accessibility,” said Councillor Joe Cressy (Trinity-Spadina, City of Toronto). “As we continue to grow, it is important that we build liveable communities that include vibrant and accessible spaces – Artscape continues to be an important partner in this project.”

Already well-known in its infancy, Artscape Sandbox has had the honour of hosting a diverse array of exciting events in its first month of operation including Reelworld’s Films With Impact, Kids Help Phone’s BroTalk launch, several performances presented by FADO Performance Art Centre including solo performances by Dorothea Rust (Switzerland) and Victoria Gray (UK) in partnership with VIVA! Art Action as well as LEGS, TOO, a staggering relay featuring 59 artists presenting 59 eight-minute performances over the course of eight hours.

The upcoming season at Sandbox will include Tarragon Theatre’s 45 and Sizzling Gala Fundraiser, JavaScript’s Open Day by Lighthouse Labs and the Microsoft Edge, the 2nd Annual Think in Pink Shop: Holiday Edition by Upon A Star Books Inc and the Canadian Breast Cancer Foundation as well as Praxis Theatre’s play Objections to Sex and Violence, which will premiere at Artscape Sandbox on Nov. 5.

“The malleability of the space and its location in ‘The Mirvish Zone’ will allow us to create an important work that is unique and accessible,” said Michael Wheeler, Artistic Director of Praxis Theatre. “Artscape Sandbox is positioned to be a leader in supporting artists and the community at large and I am thrilled to be using the space.”

Also unveiled during the opening celebration was the art installation Brief Encounters, which transformed each spacious, accessible washroom at the facility into a work of art. Curated by Mytnowych, the permanent exhibition features vinyl wall art by Dan Bergeron, Derrick Hodgson, Melissa Fisher-Rosenberg, Kirsten McCrea and Walter Scott.

Designed by Kirkor Architects, with interior design concept by +tongtong, and guided by the construction expertise of Goddard Construction, Artscape Sandbox was specifically built for flexibility. Outfitted with a grid system, theatrical lighting system and adjustable risers, the space is ideal for musical and theatrical performances, while the facility’s central location and on-site paid parking make it an in-demand hotspot for meetings and presentations, as well as product launches and after-work social events. As a multi-purpose performance and event venue, Artscape Sandbox can be booked through ArtscapeSandbox.ca.

When the COVID-19 pandemic first resulted in mass cancellations of events, exhibitions and gigs and…

This month Artscape Youngplace celebrates 5 years as a community cultural hub. In celebration of…

Exactly one month from today, come join Leanne Betasamosake Simpson and I in Toronto, June 16, for our in person (masked) launch of #RehearsalsforLiving, hosted by the brilliant
@BeverlyBain13 RSVP and share if you are up for it. https://bit.ly/3PlckIV
@AnotherStoryTO