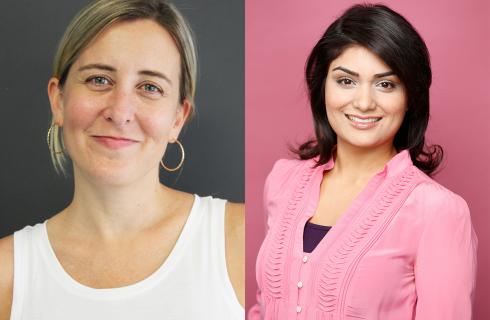 Artscape announced today the appointment of Jane Hopgood as the new Director of Fund Development and Nidhi Khanna as the new Managing Director for Daniels Spectrum. Both will play an essential role in developing and managing Artscape’s key stakeholder relations.

Jane has been a positive force in Canada’s fundraising industry for over fifteen years with a specialty in creating partnerships between corporations and cultural organizations. A firm believer that the best fundraisers are passionate about their causes, Jane began her career as a coordinator of Corporate Giving at The National Ballet of Canada and quickly became the head of its Corporate Fundraising division.  After five fulfilling years with the Ballet she moved to Arts & Communications, an agency focusing on the marketing side of sponsorship. Some of her key successes at A&C included creating the sponsorship architecture and sales for Luminato in its first year, creating major site sponsors for Evergreen Brick Works, major program sponsors for the Art Gallery of Nova Scotia, as well as the Art Gallery of Ontario.

Originally from Nova Scotia, Jane wanted to use her skills and natural ability to help an organization very close to her heart: the Nova Scotia College of Art and Design. While there, she created some of the largest corporate partnerships in the University’s history. With an interest in working on larger projects, she returned to A&C as a Senior Vice President followed by acting as Director of Partnerships & Major Gifts at JAZZ.FM91.

Jane is an avid volunteer, currently a mentor for Business for the Arts, and when not living and breathing sponsorship, enjoys tennis, swimming, reading and taking in all the wonderful arts Toronto has to offer.

Nidhi Khanna will be responsible for ensuring that the vision of Daniels Spectrum—which fulfills a crucial role in the social and community development goals of the Regent Park revitalization—continues to create an inclusive, liveable, healthy and safe neighbourhood.

Nidhi brings more than ten years of experience working in cultural industries, with a particular focus on theatre, live event management and producing.  She holds a M.A. in Text and Performance Studies from the UK’s Royal Academy of Dramatic Art and an International MBA from the Schulich School of Business in Toronto.  In her most recent role as Manager of Mississauga Celebration Square, she managed the programming, technical and operations teams to help turn this six-acre public square into a collective asset for residents and visitors alike.  She held roles in the City of Mississauga’s Culture Division in Culture Planning and Theatre Client Services and has worked with community and children’s theatre and other non-profit organizations in Montreal and Toronto. Nidhi helps insomniacs find restful sleep through conversation as co-host of The Insomnia Project, a podcast with an international following on iTunes and Soundcloud.  She hails from Montreal and is an avid lover of coffee, food and Boston Terriers.

Artscape celebrates the contributions of Leslie Najgebauer, outgoing Director of Fund Development, and Seema Jethalal, outgoing Managing Director of Daniels Spectrum, and wishes them the best in their respective new roles as the Director of Development at The Museum of Contemporary Art in Toronto and incoming Regional Director General (ON) of Canadian Heritage.

Artscape looks forward to seeing Jane and Nidhi contribute their expertise towards our strategic vision.

Over the summer, Digital Media Lab Manager, Casey Johnson, along with his team of expert…

Where Are They Now – 2020 RBC Launchpad Music Entrepreneurship Program