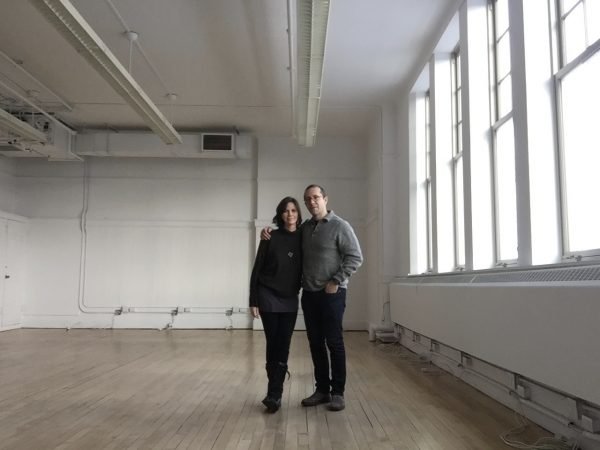 Salvador Alanis and Ximena Berecochea are the founders of the Institute for Creative Exchange (ICE) at Artscape Youngplace. This power couple facilitates workshops designed to promote artistic collaboration with a focus on creative processes. Our Communications & Promotional Assistant at Artscape Youngplace got to chat with the lovely duo about the workshops, the importance of collaboration, and their personal histories.

1. Can you tell me a little about your background? I heard you were Flex Studio renters before you became Artscape Tenants.

Salvador: It’s an interesting story. I came here with a friend looking for a studio to rent while the building was in its renovating period. At the time, I was working television and in-between productions. We thought this was a great place, but unfortunately the timing wasn’t right. Some years later, we needed a space for conducting workshops with the Institute for Creative Exchange (ICE), and after attending a Flex Studio meeting, inquired about rental costs. We had already rented the Flex Studios and were interested in having an office for more specific work. We spoke to Claire Leighton (Program and Flex Studio Coordinator) who informed us that at the time, there were no studios. Forty-five minutes later, Claire called back to say, “You know what, there is an opportunity.” We got the space and were so happy. Being connected to the Artscape community allows us to develop relationships between local artists and international artists from all over the world.

2. Can you tell me about The Institute for Creative Exchange?

Ximena: Our intention with The Institute for Creative Exchange is to bring together different disciplines through workshops. They [workshops] are directed by artists, writers, academics, or people devoted to the arts, in whichever area. The idea is to have a three to five day intensive workshop, demonstrating the creative processes of the individuals directing the workshop. The aim at the end of the workshops is for all of the participants to have developed something new, and work outside of their current mediums and topics.

For example, in our first workshop, we invited a very important writer and artist from Mexico. The topic was Art and Orthopedics. He was a victim of Thalidomide, a drug used in the 1960s to ease the symptoms of pregnancy, which was not tested properly, and as a result, children were born with birth defects.

Salvador: His novels are all a bit dark, but he is a very comical in person. He likes to play with this dual personality in his work.

Salvador: We have a festival in Mexico. It’s an important arts festival and the aim is to develop a Canadian program for the festival. It’s a new project and we only just delivered the first show list of artists. Eventually, we will take those artists to Mexico for this festival. We’ve been in touch with different government entities to start this process of connecting cultures.

4. How can a creative individual turn a great idea into reality?

Salvador: First thing, the arts community in Canada is super active and vibrant.  I normally would answer your question with, “Don’t be afraid and work hard and do it.”  But that’s not the case. There is a lot of high quality production coming out of Canada. For me, the key is how to develop work outside the boundaries of institutions. The Toronto arts scene is socially dynamic because of the city’s changing landscape, which has cultivated the perfect moment for doing things collectively. Individuals in the arts community need to push for both independent and collective projects.

Ximena: The artist often works in isolation. With our workshops, we try to promote collaboration; a place to meet other artists, work in new mediums, and learn about other creative processes. In this way, the artist is always expanding their language.

5. What motivates you on a Monday morning here at Artscape Youngplace?

Salvador: Every day for me is an adventure. Working in this creative enterprise is thrilling. I walk around with a smile because I’m happy to see the people in this building, and feel connected to them. I’ve been working for over thirty years in television and marketing, and have never felt this connection anywhere else.

Ximena: I agree with Salvador. Each time we get to that moment where our life becomes established with a routine, we like to break with that and do something crazy. When you are in a place like this [Artscape Youngplace], which is devoted to the arts, it’s hard to get to that point [routine]. It’s always changing and that’s what I like. That’s what makes Mondays the same as Fridays.

Salvador: Launching the first workshop here was fantastic. People from all over the world attended the event. We didn’t expect the amount of positive feedback we received from hosting the workshops.

Ximena: It was very emotional at the end of the five-day workshop. People were so moved that they were crying because they had made deep connections with each other. We got to the point we wanted to get to; to bring cultures and disciplines together. It really worked.

7. What’s your hidden talent? Or just a random fact about yourself?

Ximena: More than a hidden talent we have a hidden history (both laugh).

Salvador: I’m a writer and continue to publish work in Spain, Mexico and Latin America, but not as much here. However, lately I’ve been passionate about food. I really enjoy cooking. In the last ten years, I think I’ve read more cooking books than literature, art, and culture books. I associate cooking with all the loves you have – things and people – and when you cook, you are communicating your love to the people you are cooking for. I’m also very messy in the kitchen.

Ximena: My hidden talent is to clean up after him!

Elaina Pawelka was the Communications & Promotional Assistant at Artscape Youngplace during the summer of 2017. She started the “Coffee and Conversation” series on the Artscape Youngplace blog to learn more about the artistically diverse tenants working in the building, and offer inspiration to those interested in creativity or anyone looking for an insightful read.

A Letterpress Revival at Graven Feather

Last month, a group of lucky Artscape staff were invited to Graven Feather for an…

Our Tweets
Retweet on TwitterArtscape Retweeted

To do this, we brought together a panel moderated by @avsarathy with lived experience across communities, genders, sectors & geographies.

Applying for grants is a great way for artists to ease the financial burden that comes as part of being a working artist. On Jan 28, @artsunite_ca will be part of a panel discussion to help artists navigate the tools available to them.