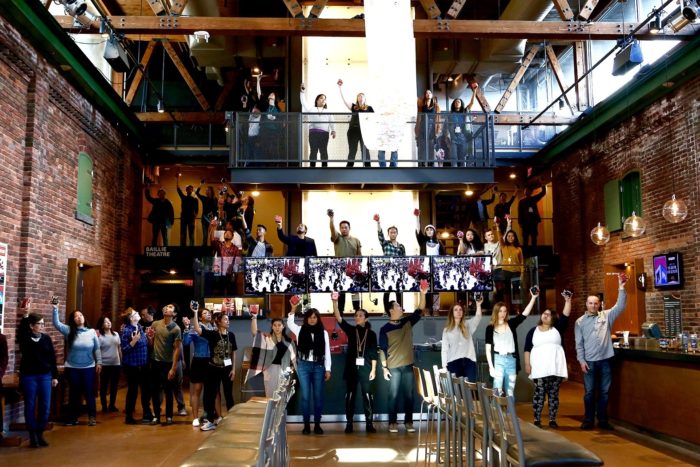 On November 19, Cassettes 100, a unique performance piece, made its Canadian debut in the lobby of the Young Centre for the Performing Arts through the efforts of artists Andrea Mapili, Byron Abalos, along with Soulpepper Theatre Company and the UP Center for Ethnomusicology in Manila.

This event brought a cast of 100 volunteers together for one day to perform a “live-action soundscape” composed more than 40 years ago by José Maceda, a nationally-renowned, award-winning Philippine artist and Andrea Mapili’s beloved grandfather.

We caught up with Artscape tenants Andrea and Byron, who are partners in work and life, to talk about their experience premiering Cassettes 100 in Toronto, and explore its relevance in 1970s Manila and today. 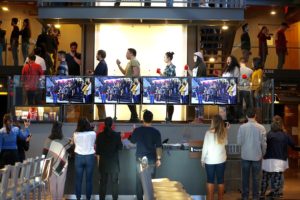 Tell me about Cassettes 100. What’s the history of this piece?

Andrea: My grandfather was José Maceda. He was an ethnomusicologist, avant-garde composer and a National Artist of the Philippines. This past year, he was honoured in the Philippines with Maceda 100, a year-long festival dedicated to his works. We travelled to Manila to take part in the opening of the festival and it was incredibly moving to see his works performed today.

Cassettes 100 features 100 tracks that include indigenous sounds of the Philippines—nature sounds and voices—played on simple cassette players held by 100 non-professional artists in a 30-minute performance. The sounds are layered on top of one another, meant to be listened to at the same time. The performers mingle with the audience. The original performance was in 1971, in the lobby of the Cultural Centre of the Philippines, a very opulent space. At the time, the performance was considered a radical social act; featuring ethnic sounds, regular people and low-fi equipment, it presented a whole new way of looking at art, in a space used to entertaining western ideas of art. And it represented the Philippine experience, and Filipino people.

It has only been performed a few times since then. When we performed in the piece in Manila, we decided to bring it here. 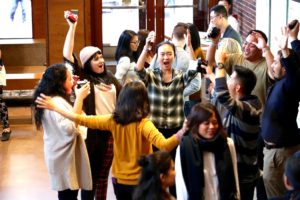 What was your experience premiering Cassettes 100 in Canada?

Andrea: Our Canadian performance was an official event in the Maceda 100 festival. We worked with the UP Center for Ethnomusicology at the University of the Philippines, which maintains the archive of José Maceda’s work. They did the digital transfer of the recordings and set us up with the mp3 players used in our performance. Soulpepper generously supported the show through the Shen Development Festival.

The overall concept I used in my directing and choreographing was “coming together,” as the show brings together 100 tracks and 100 people into one soundscape, one cast. I took the idea of a group of disparate parts, of different people coming together, and matched them with movements we understand—pedestrian movements, mostly walking and a bit of jogging.

When it was time for our 100 volunteers to rehearse and perform—all done in one four-hour call—we started off by asking everyone to meditate on these questions: 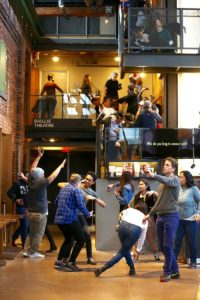 What was it like, being part of this performance in Toronto?

Byron: It was really beautiful. This group of strangers came together at 10 AM, and after four hours of rehearsals, lunch (provided by Kanto by Tita Flips) and a 30-minute performance, the group had transformed, and had become united in the experience. It sounded amazing and was a powerful, moving experience with all the other people. The way I see it, the performance is a demonstration of what happens when we value each other’s uniqueness and difference. The piece also gave rise to thoughts about my immediate family, my extended family, and my in-laws, including Andrea’s grandfather and his legacy.

I felt very proud at the end of the experience. A lot of our Artscape neighbours came to participate in the event, and I felt proud of that too, to be part of such a supportive community.

Do you have plans to mount the show again?

Andrea: We’d love to do this piece again or maybe another Maceda piece. Our partners at the University of the Philippines are open to this. We’re talking about it!

Read more at http://andreamapili.com/cassettes100 and watch the video recap at https://youtu.be/xm1-_WnZ3ao.

Artscape Wychwood Barns is where artists, designers, social purpose organizations and environmental non-profits come together to…