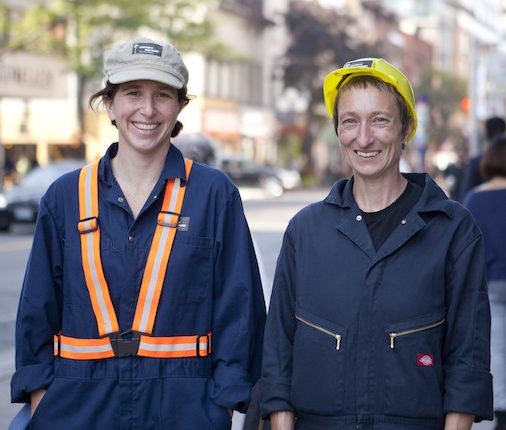 “At Work in the Memory Archive” is a fascinating initiative to catalogue and shed light on under-recognized city-building and social justice efforts in Toronto. This interactive installation forms part of the upcoming MYSEUM:Intersections at Artscape Youngplace from March 22-25. We spoke with the founders of this interactive installation, Department of Public Memory, to learn more it and the impact they hope the show will have.

What is Department of Public Memory?

Department of Public Memory is a two-person art collective made up of Maggie Hutcheson and Elinor Whidden. But really, Department of Public Memory is all Toronto residents—certainly everyone who has shared their memories and insights with us over the years. Public memory requires widespread participation! We’re interested in any sustained effort to make Toronto more liveable and socially just.

How did Department of Public Memory begin?

In 2011, a lot of Toronto communities were organizing to prevent municipal funding cuts to public services. Department of Public Memory began as our contribution to that movement. As artists, we wanted to explore the contributions that publicly funded programs make to daily life in Toronto. We already knew that a great deal of energy and effort had gone into creating libraries, daycares, drop-ins and other components of our social safety net, and that these are  really important to citizens, shaping the experience of life in this city. In an effort to document and recognize the importance of public services, we began to interview Toronto residents about sites that mattered to them. Since 2011 we’ve expanded our definition of public services to include activist movements and unfunded initiatives. So far, our work has been supported by the Canada Council for the Arts, the Ontario Arts Council, the Toronto Arts Council and Myseum.

Why is it important to maintain an archive of public services?

Publicly funded programs and services are typically overlooked and underappreciated. They aren’t historical landmarks, tourist destinations, glitzy or glamorous in any way. But their histories are inspirational. They’re both a reminder of what is possible and a prompt for conversation about social values. What kind of society do we want to live in? How can we better connect with and support each other? They’re instructive too. These are stories of how on-the-ground social change is made—the strategies, the tactics, and the relationships.

How does the archive work? Can anyone submit an item?

The online Memory Archive shares stories of overlooked efforts to make Toronto more liveable. It includes files on housing activism, HIV/AIDS organizing, community gardens and a lot more. Each file is the result of a collaborative effort with staff, activists, volunteers and community members who have lived memories of these efforts, and we’ve carefully curated the items to ensure that they resonate with those communities.  But the purpose of the archive is to prompt public memory in anyone who encounters it. It’s an invitation to sit down and remember with us, to dig deep into your own memory archive by spending time with the objects and ephemera in this physical one.

Tell me about the signs. How many are there across town and how are they installed?

To date, Department of Public Memory has installed 12 site-specific signs across the city. Each one commemorates a specific public service, for instance a daycare, a health program, a movement for better working conditions. They’re not typical heritage plaques and they were made in collaboration with a range of distinct Toronto communities. We install them on street poles in public space, usually as part of a larger memory-sharing event. We’ve recently made 12 more signs, which we plan to install later this spring. They’re a bit different. We’ll have them on display at our upcoming show at Artscape Youngplace.

How does “At Work in the Memory Archive” work?

We’ll be hosting a series of interactive events where people can open archive files together in small groups, following a series of fun and unusual instructions. These events are free, and are a cross between a sit-down scavenger hunt and a civic discussion. People are also welcome to drop in anytime during our gallery hours. Come check out our full roster of commemorative signs, peruse an archive file on your own, or tell us about a public site that you think should be remembered.

RSVP for events during the exhibition on Eventbrite or drop-in to see the archive in Studio 109, 180 Shaw Street West, from March 22 to 25, 2018. Department of Public Memory is online at departmentofpublicmemory.com.

Painter David Barnett, pictured above, is the first subject in photographer Greg Edwards' portraits of Artscapers in…

From the margins to center stage, Rosey Ugo Edeh of b current speaks on the elevation and amplification of Black and Brown artists

“In this day and age, all work, particularly by black artists—it’s extremely important that they…

On Saturday, Sept. 19, the 2nd annual Artscape Award was presented at the Toronto Outdoor Art…