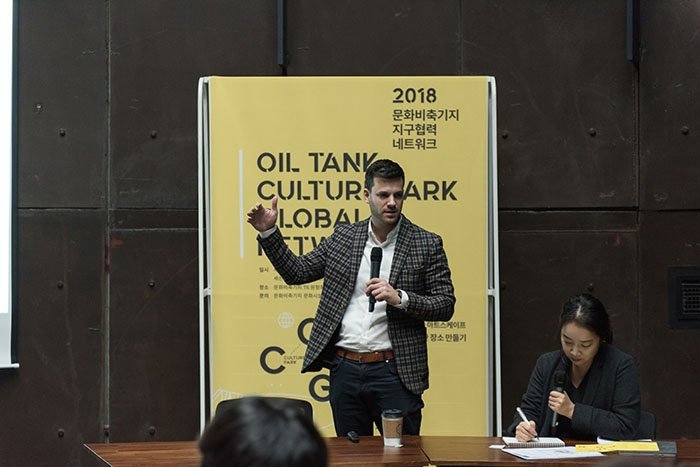 The Oil Tank Culture Park, located in Seoul, South Korea, sits on a 30-acre site consisting of six large tanks that served as an emergency oil reserve for the South Korean government for 40 years. With the oil facility now abandoned, it was repurposed as a sprawling urban art park in 2017, outfitted for large performance spaces, commercial offices and a museum. But the park is looking to explore how it can more effectively program the space to draw the number of visitors it had originally envisioned.

Ideally situated in a central part of the city, the park is poised to demonstrate its potential for meaningful activation and engagement to the broader community.

In November, Assaf Weisz, Managing Director of the Artscape Creative Placemaking Lab, had the privilege of speaking at the Oil Tank Culture Park Global Series about Artscape’s extensive experience in the reuse of aging municipal infrastructure.

Assaf delivered a seminar at the Oil Tank Culture Park Global Series, leading valuable discussions on how to turn the park into an iconic and thriving community space. The hosts and participants were keen to discuss Toronto’s arts and cultural infrastructure and commended our city’s efforts toward thoughtful development as an international best practice.

Beyond these conversations, the trip also offered the opportunity to meet with several local award-winning artists and activists, who may use the Oil Tank Culture Park as a canvas in the future.

The Creative Placemaking Lab has been invited back for next years’ Series to further discussions and work with the park’s leadership to continue sharing ideas for embedding arts and culture into community.

On April 21, we held an event to proudly present Artscape Daniels Launchpad, our one-stop art and…