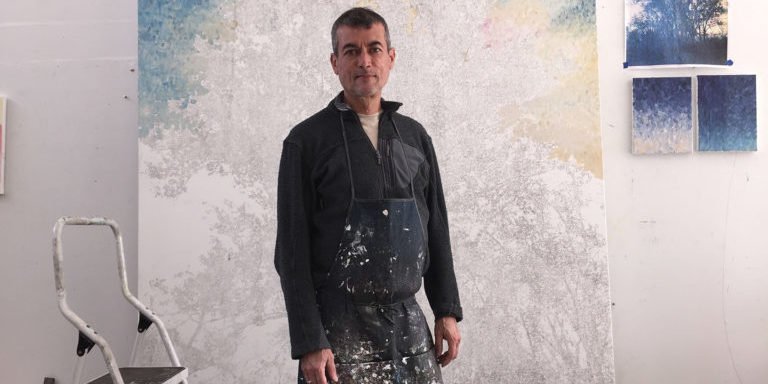 Looking at Stephen Andrews’ work, you’ll often find yourself enraptured by the reproductions of mixed media. Originally from Sarnia, Ontario, Andrews has been part of the Artscape Gibraltar Point Community for many years and was recently honoured with a Governor General’s Award in Visual and Media Arts for his work in mixed media.

“I’m really interested in depicting the means by which we receive information as well as the information itself,” Andrews says. “What I try to do is show people a little about the world and how it’s filtered to us through various platforms like television, newspapers, social media and more. I try to depict these platforms as well as the content that they deliver.”

What that looks like for Andrews means using different techniques to make things that look like they’re in a magazine, newspapers on on digital platforms.

“Digital media is an interesting platform,” Andrews says. “It can be easily manipulated. We don’t really know what’s real,” Andrews notes. To counter this, Andrews focuses his time on rendering things by hand to lend an element of trust that otherwise might not be present in the work.

Being part of the Artscape Gibraltar Point community, where Andrews has a studio, gives him access to a more social environment where he can collaborate.

“It’s kind of a laboratory for me,” Andrews says. “Most of the time I have a very solitary creative practice. Artscape Gibraltar Point has people from very different artistic backgrounds, so it’s nice to have people looking at your stuff and talking about it as you’re making it.”

Check out some of Stephen Andrews’ art!