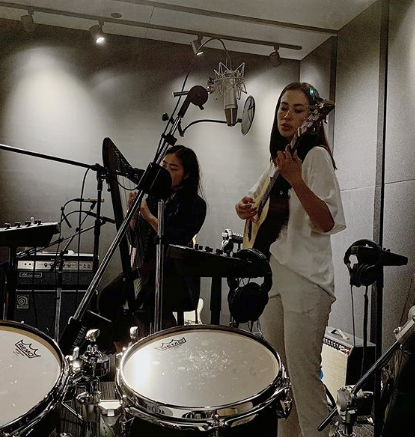 Outside of work as an Artscape Daniels Launchpad Member Advisor, Estyr is a singer-songwriter living and dreaming in Toronto. With lush vocals and an acoustic guitar, her songs skirt indie alt-folk and neo-soul influences while remaining firmly rooted in lyrical storytelling.

She is a also a vocalist, guitarist and lyricist for the band, Tiger Balme, that she created with harpist, poet and multi-disciplinary performer Anda Zeng, percussionist Danielle Sum, and bassist and vocalist Jessika Godfrey.

Tiger Balme was formed on a shared desire to increase representation of female-identifying artists and people of colour in the local Toronto music scene. Their songs “acknowledge the mundane magic of living in our bodies, feeling spiritually homeless, and finding belonging in marginalized places and identities.”

Recently, Estyr and the rest of the all-female band stopped by the Digital Media Lab to rehearse together. We were immediately impressed Estyr’s powerful vocals and Tiger Balme’s alternative sound

“The team [at the Digital Media Lab] is second to none. They are super kind and incredibly talented. I love working with them as a Member Advisor and as a musician,” Estyr reflects.

Hear a clip of Tiger Balme playing at Artscape Daniels Launchpad on our @LaunchpadTO Instagram page.

A message about the new COVID-19 measures

Artscape Welcomes New Members to its Board of Directors

As Artscape enters a new decade, we are pleased to bring the fresh perspectives of…