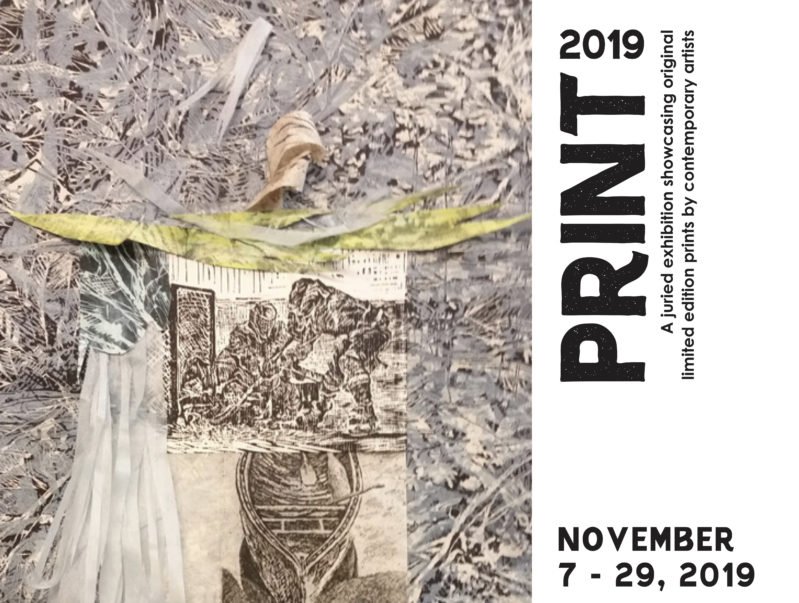 One of the few remaining public art galleries in Toronto, the John B. Aird Gallery has taken up residence at Artscape West Queen West since June. Juried by two established artists, Maureen Da Silva and Barbara Klunder, their latest exhibition, Print 2019 features 54 diverse artists showcasing the  possibilities of print media until November 29.

“Print has always been an exciting art from for me because of its ability to transform an image through its technical processes,” explained Maureen Da Silva. “The versatility of print is truly on display in this survey exhibition, and it is exciting to see lush lithographs hang next to carefully crafted intaglios, beautifully articulated relief prints alongside intriguing experiments in digital and photographic formats, and so many other print possibilities.”

Maureen Da Silva is a founding artist and studio manager of the inPrint Collective, based in Toronto. Obtaining her BFA from York University, she works as an artist-educator across the GTA, and has organized many community-based programs over the years that utilize printmaking’s story-telling potential.

For this survey exhibition, she worked with Canadian artist and illustrator, Barbara Klunder, to curate the show. Barbara Klynder is well-known internationally for her bold graphic style, political messages and provocative imagery. She won the Lifetime Achievement Award from the Art Directors Club of Canada in 2009. She is known for working in many media, including printmaking.
“After viewing nearly 200 prints from around the world, from classic woodcut and linocuts to new digital and technical methods, we reduced it to 60 diverse, authoritative and innovative prints, displaying substance and beauty on many themes…this is not to be missed,” explained Barbara Klunder.

The John B. Aird Gallery is open Wednesday to Sunday from 1pm – 5pm at 906 West Queen West.

Elevate your creative output with a new set of tech tools!

This week, Artscape Daniels Launchpad is kicking off a special Full Access PLUS membership that…