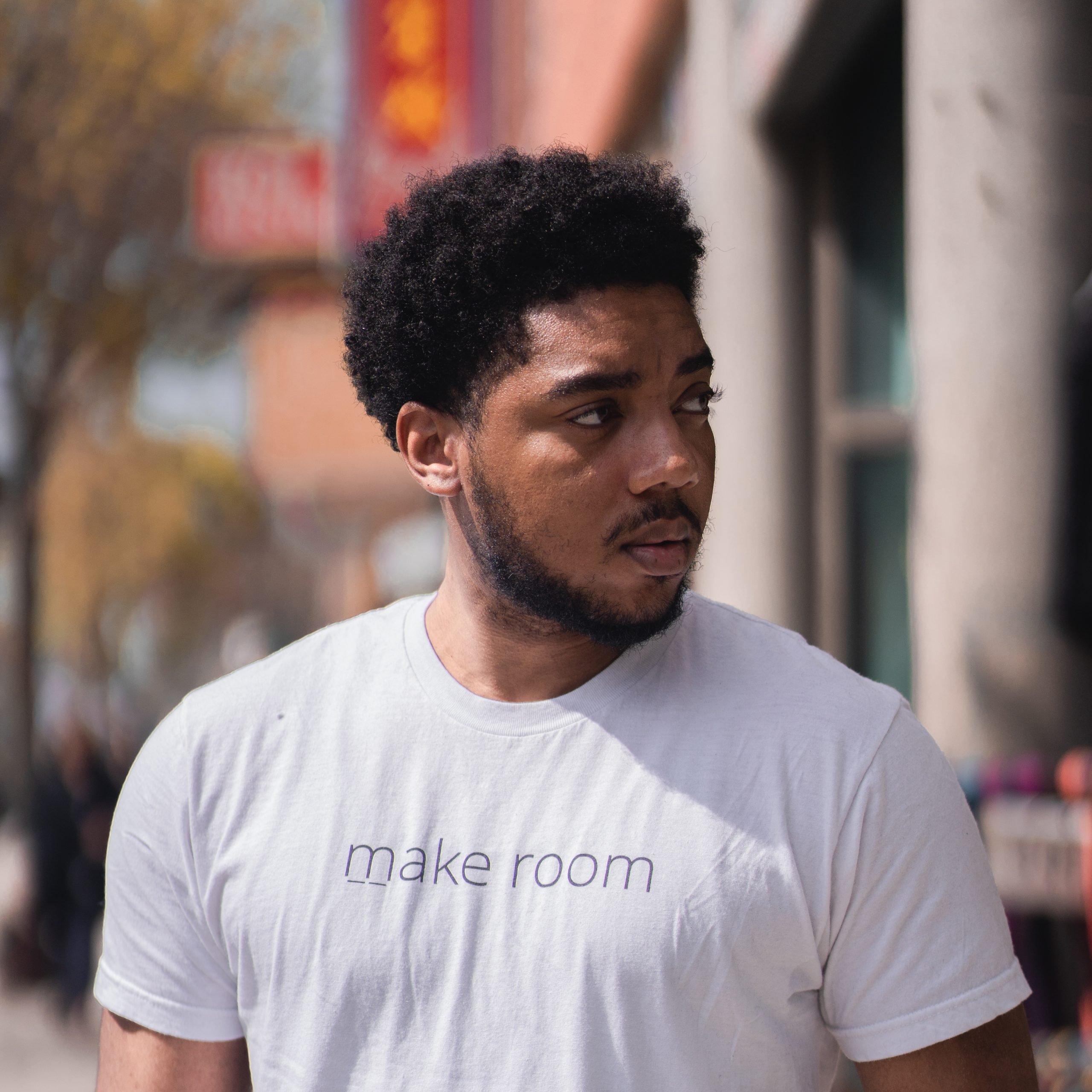 “I love being able to get people to just stop and look at things. Stop what they’re doing, forget anything that’s on their mind, and experience what I’ve made.”

Taking a pause to be truly immersed in an experience is a consistent theme in the Trevor Twells story.

A maladaptive daydreamer, Trevor found that even when his mind wandered while doing the most mundane activities, such as commuting between Scarborough and downtown Toronto, he would become fully absorbed in the experience; actively assessing and thinking about his surroundings. 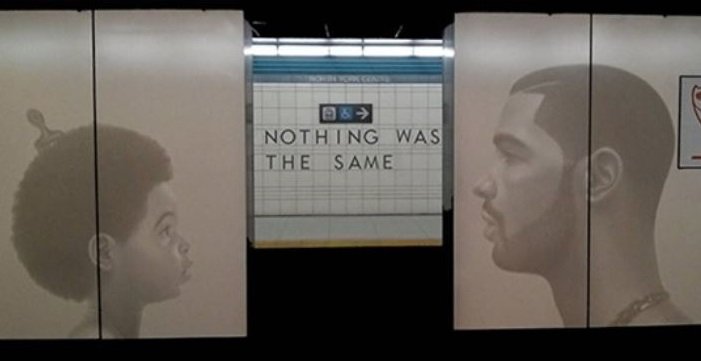 One day on his commute, he began reimagining subway stops with a pop culture twist. St. George Station became George Costanza Station, Castle Frank became Frank Castle, and so on. Using his daydream as inspiration, he created an art project where he took TTC stations and photoshopped them into pop culture icons.

The project went on to be recognized by BlogTO, defining Trevor as the “artist behind the project”, which set the stage for his artistic journey.

“I had never really thought of myself as an artist until [that moment].”

It’s always interesting to hear somebody with an impressive resume of accomplishments like Trevor’s say that about their past selves. The Trevor I’m speaking to today is a Product Designer, Artist and Social Entrepreneur who, as I learned, keeps himself busier than I would have imagined with his many ongoing projects and initiatives.

I sat with Trevor to learn more about him, his artistic journey, what inspires him, and his latest initiative MakeRoom Inc. – a non-profit aiming to enable artists with space and real estate to display their work in Toronto. 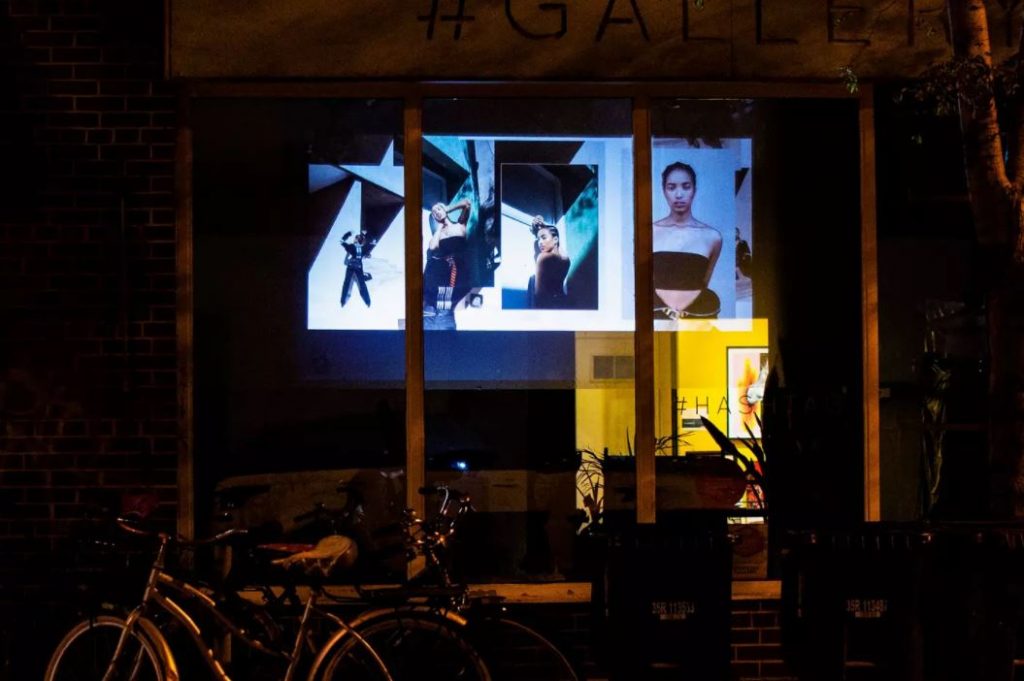 MakeRoom helps artists share their work by projecting their art onto spaces across Toronto. Artwork by Nyaomi Boogs.

My favourite starter question when chatting with creatives is asking about the early days of their journey. It sounds simple and well, obvious, but it really is interesting to see how a person’s craft has evolved over time, as well as seeing how as a baseline, their primary motivations tend to stay pretty stagnant. 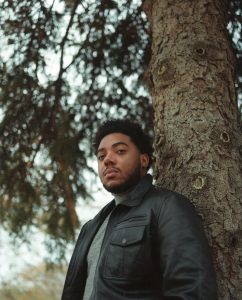 Trevor is a person of many skills, many of which are self taught. While taking some coding and programming classes in high school, he was certain he wanted to create things, he just wasn’t sure what.

After pouring his blood, sweat and tears into some passion projects (including one where he wanted to create the next Facebook), he discovered he had developed a few valuable skills in coding, programming and graphic design. These skills took him to college where he created eFolio, a platform intended to help his peers find jobs.

Busy juggling school, eFolio and an internship, it was during the commute to his internship that he found the inspiration for his pop culture TTC project. After gaining some recognition and more confidence with this project, he developed a deeper sense of what he wanted to do.

He had always known he liked creating things, and he knew he wanted to help people. He knew he wanted to create things that people would have to take pause with to fully experience. Then one day, it clicked – he wanted to recontextualize people’s experience from mundane things, like taking the subway (which funnily enough, has been the source of many bursts of inspiration), and really make them sit with it.

“[Taking the subway is] one of the most class-agnostic things in this city; everybody takes the subway. It’s the one place where there’s no divide but everyone’s stuck in their own bubble. No one really takes pause and understands the type of interaction they’re going through.”

This thought inspired what would be the first of many public art shows – Congestion in 3D. 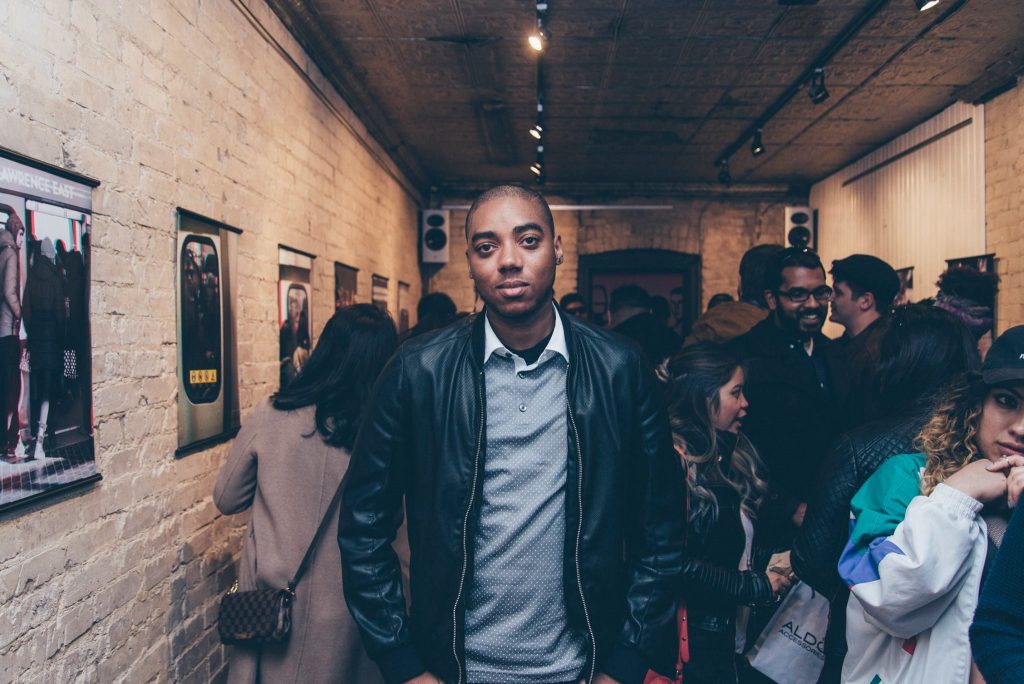 Talk about experiential. Using anaglyph 3D images and noise, people were able to fully immerse themselves in the full weight of the art’s oppressive effect. Having found a way to reach people who may not have the experience of taking the TTC during peak hours, this project sparked important conversations on the sustainability (or lack thereof) of the TTC.

“I thought I had hit people on this deeper level – this thing that was totally mundane to them, they were able to take pause and actually sit with it.”

In 2019, he took “experiential” to another level with his Open Canvas exhibit at Connections here at Artscape Daniels Launchpad. He had created a digital canvas in real life for people to draw on using their cellphones. The collaborative creation process served as a bit of counter culture and commentary on digital waste. 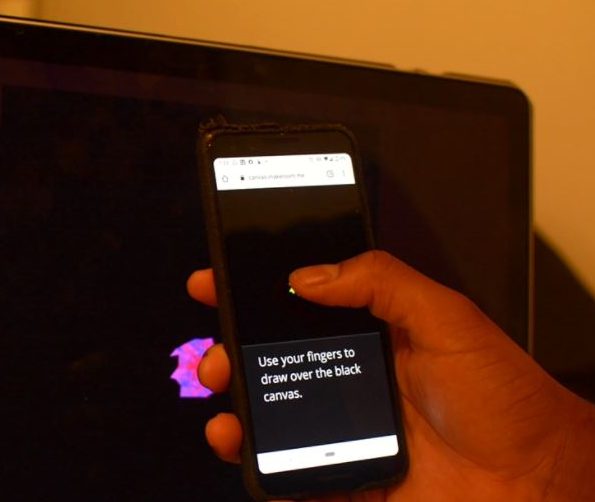 “Artists can create something amazing, it gets 500 likes and gets tossed aside. There’s archives of brilliant work that won’t ever be seen past a week. Getting people involved in the creation process is one of the biggest triumphs because you’re taking something digital and making it physical, and getting [people] to actually put value on something that’s digital.”

While physical mediums are always preferred, Trevor acknowledges that being an artist in the digital age comes with its own unique set of advantages and challenges. While digital mediums allow artists to reach a wider audience, it also encourages passive consumption which essentially goes against everything he stands for.

“When art goes digital, the value people put on it lessens a bit. Yes, you have the benefit of reaching new audiences, but the weight of the art itself sort of gets pushed away.”

This is why in the perpetually-online era of Covid, he made the decision to focus his time and energy on MakeRoom. He felt a sense of responsibility both as an artist, and as somebody trying to make meaningful change.

MakeRoom was initially founded as a response to artists being pushed out of Toronto to more affordable cities like Hamilton. Over his career, he experienced firsthand how difficult it is for artists to have solo exhibits.

“The condo-fication of Toronto is pushing out spaces for people to actually show their art, to a point where the idea of having a solo exhibit without the representation of a bigger conglomerate is slowly becoming extinct.”

Being a Black artist himself, Trevor also has the lived experience of jumping the hurdles faced by Black artists in getting gallery representation. He shared with me a recent study crunching the numbers on BlPOC representation at leading commercial galleries in Toronto. The study found that Black and Indigenous representation at these institutions came to a combined total of less than 3% – a very problematic statistic.

All of this lit a fire under him to pursue making meaningful change.

Looking at the different venues scattered across Toronto, Trevor noticed many of the buildings in prime locations also happened to be dead at night. Seeing an opportunity while considering the reality of living in a digital era, he asked himself: “How do I give the freedom of digital within a physical space?”

The answer to that question is what formed the fundamental concept of MakeRoom’s main initiative, The Space Project – where artists can submit their work to be projected onto empty public-facing spaces, and displayed on MakeRoom’s online platform for free.

“It’s almost like an act of rebellion against the city, too, for pushing these galleries and artists out.”

With a pitch ready, Trevor quickly garnered the support of galleries and secured partnerships with #Hashtag Gallery and Freedom Factory. Since then, MakeRoom has partnered with CSI Spadina, Remote Gallery, and Onyx Barbers. 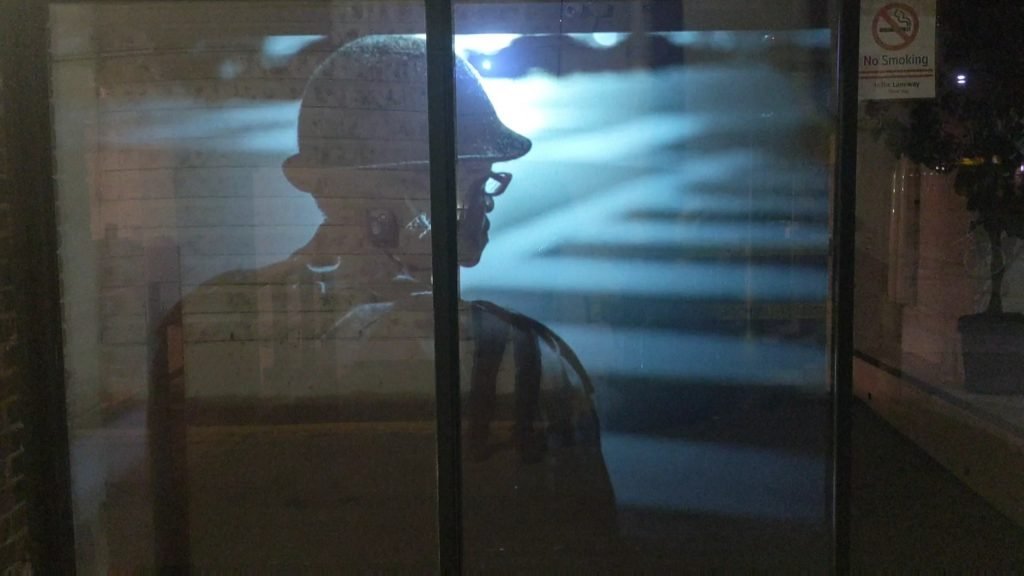 Image of projection at CSI Spadina

Developing MakeRoom was a full-time job, so Trevor spent his days working away at Launchpad full-time. There, he connected with other members of the community, some of whom would go on to contribute to the project in meaningful ways – from acting as a sounding board, to coming on as an advisor, and with some even joining as guest curators.

You may have spotted Trevor on artist Yung Yemi’s Black Lives Matter mural at Launchpad. Curated by photographer and visual artist Zahra Siddiqui, the mural was created to showcase members of the community for their meaningful contributions to their communities.

Last summer, there was an uptick in resources on how to support the Black Lives Matter movement being shared widely on social media. This led Trevor to think of ways he could utilize his skills and platform to help.

Seeing people doing the labour to create these resources only for much of it to “disappear” in a matter of hours on social media, is a problem. Seeing this, he challenged himself to create a crowdsourced resource that was filterable, searchable and overall accessible. After a sleepless night, he pulled it together in 24 hours.

The MakeRoom BLM resource now has over 100 resources and is still growing – you can check it out and submit links here. 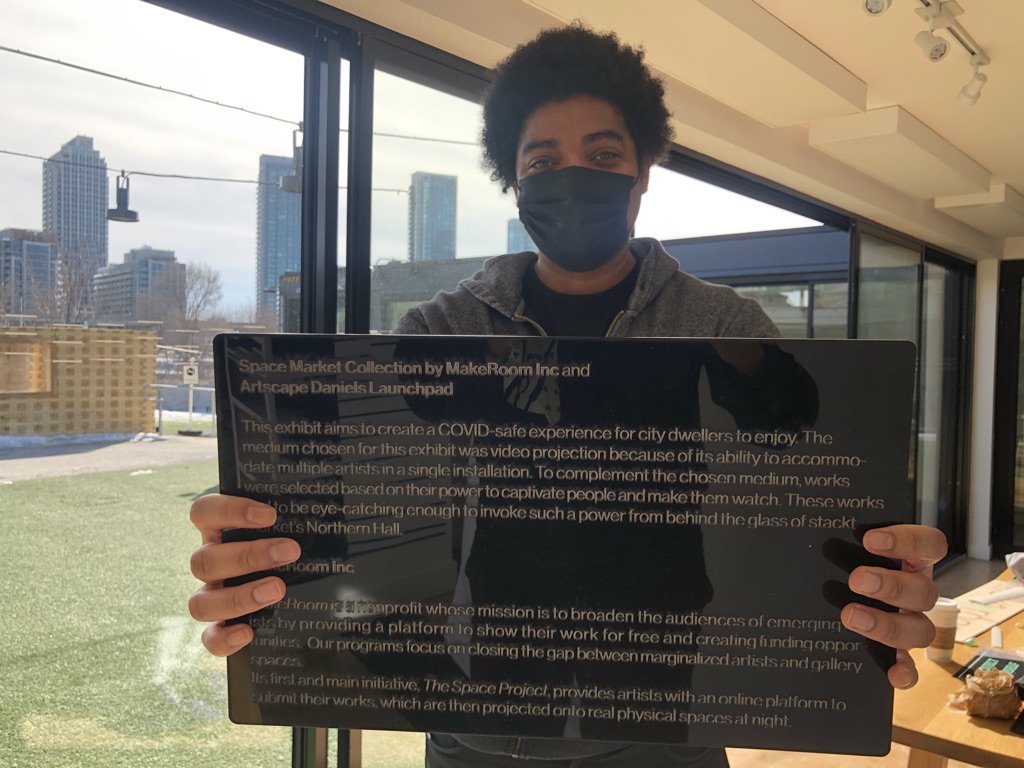 So, what is Trevor up to these days? MakeRoom has a very exciting collaboration happening right now with Launchpad and stackt market called the Space Market Collection.

The limited-run collection of dynamic art and videos by local artists is currently being projected on the walls of stackt’s North Hall, and can be viewed from outside. The exhibit sticks to the theme of merging digital and physical, creating a Covid-safe experience for people to enjoy.

The free exhibit runs until the end of March, and you should definitely go check it out! Pro tip: Optimal viewing times are between 3PM – 7PM.

Check out Trevor’s past work:

Before he was a Studio Tech in Artscape Daniels Launchpad’s Fine Metals + Jewellery Studio,…

West Queen West is one of Toronto’s most popular neighbourhoods, home to hip coffee shops,…

Let There Be Art: Zahra Siddiqui and Diversity in Creativity