Spirit of the Narrows 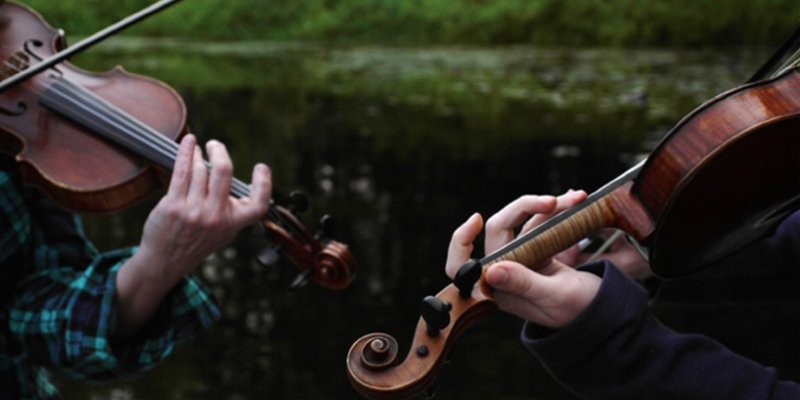 Created and written by Anne Lederman, and performed by Anne and Capucine Onn, Spirit of the Narrows is the story of one woman’s journey into the world of Aboriginal fiddling. As a young musician, Anne became fascinated with the unusual sound of Métis and First Nations fiddling in her home province of Manitoba. In the mid 1980s, she set out to learn more about it. Whom did she meet but fiddlers like Carl Grexton, Emile Spence, Laurence Flett, Grandy Fagnan, Teddy Boy Houle and a host of others, some of whom didn’t quite know what to make of this young woman with a fiddle under her arm. Entering a world very different from her own, the play is her journey—between present and past, between cultures, and between states of mind.

Through one woman’s eyes, Spirit of the Narrows is a story about a uniquely Canadian music and the people who created It. The music is like no other, embodying Indigenous, French, English, American and Eastern European traditions, all played on a small box with four strings. Spirit of the Narrows is alive with humour, insight and respect and is a tribute to the people and the music Anne came to know. Audiences come away from the show with the unique sounds of Aboriginal folk fiddling ringing in their ears, along with a new understanding of life on the Canadian prairies in the late 20th century. And of how this music tells the story of the coming together of many peoples. Like Anne, you won’t be quite the same on your return.

Anne has performed a solo version of the show from Wells, B.C. to Aberdeen, Scotland, in homes, church basements, classrooms, folk clubs and theaters. In 2004, the Blyth Festival invited her to adapt it for 2 performers, which did so well it was brought back for a 2nd season in 2005. In 2015 and 2016, the show was revived at The Pearl Company in Hamilton to rave reviews, called “The Best of 2015” by Hamilton Arts paper, View.

“What an incredible show! A show that provokes thought and is marvelously entertaining. Congratulations on such an excellent production.” – Mark Nonkes, Blyth 2004

“Anne is a great fiddler and story teller. She has clearly absorbed many of the accents and idiosyncrasies of rural Manitoba, often portrayed to hilarious effect. Recommended for those who love music, fiddle, Manitoba, and good times.” – Mackenzie Kristjon Jenkyns, Raise the Hammer (online review) Nov. 2015

“Vivid, layered, intimate and, at points, mystical… The musicians she meets and the complexity and pathos of their experiences as individuals and as First Nations people are beautifully brought to life. The two actors navigate time, space, clashes of identity, culture and musical tradition into one skillfully woven performance.” – Allison Jones, The View

“While not Métis herself, Lederman has devoted herself to the preservation of old fiddle music.” – Métis Nation of Ontario website

“You cannot experience Spirit of the Narrows without thinking that Lederman was born to find this music.” – Robert Reid, The Record

“Anne Lederman has done something incredible here, and the scope of its cultural value is something that is almost impossible to appraise other than to say this: it’s more than a record or a testament. It is truly a living and breathing coil of our collective Canadian DNA and it deserves to be cherished.” – Gil Garratt, Blyth Theatre Festival