Nineteen years ago and fresh out of school, Leif Benner was hungry to kick off his career as a custom goldsmith in the city. After catching wind of Artscape’s head lease in the Distillery District – intrigued by the affordable rent model – Benner moved in and started his journey as a young entrepreneur.

After almost two decades, the artist bids an emotional goodbye to his space in the Case Goods Warehouse, reflecting on what he calls ‘an amazing’ time.

“When I started in the industry everything was low tech, hand-carved…I wanted to embrace technology and get ahead of the trend, which required significant financial investments in tools,” he said. “That was only possible for me because of Artscape, and the affordable rent they offered.” 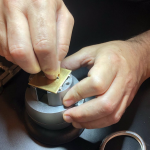 As one of Artscape’s original tenants in the Distillery District, Benner reflects on a time – 20 years ago – when the area was not yet developed, and how artist presence reshaped the community.

“When I moved in I think there was a Balzac’s…the parking lots weren’t even paved yet,” he said. “The artists that occupied the space brought an entirely new feeling to the district…the vibe became magical.”

Artscape joined the Distillery District in its infancy stages. By participating in the revitalization of the area, the importance and power of arts and culture in the city became quickly known. Artscape helped build critical mass, credibility and authenticity in the area – forming the foundation of its creative placemaking practice.

While newer projects contain an ownership structure, Artscape’s agreement with the Distillery was set up as a 20-year head lease with a finite date, and no option to renew – a reality the organization was aware of at the time. 2022 marks the final year of the Case Goods Warehouse, and while Benner is saddened to leave, he wants to focus on “what’s been accomplished here.”

“We’re in mourning but we should also be amazed by what we’ve done,” he said. “We, the artists, were part of a massive community build here. I’ve met amazing people, I have friendships that will last. [Artscape] has helped me build a thriving business, have a family and a home. I will forever be grateful.” The loss of affordable real estate and studio space for artists in the city is a known reality – one Artscape continues to take very seriously. Although there are small pockets of space available throughout Toronto, having the ability to cluster tenants and build community – like in the Distillery – is becoming much more difficult. As the organization plans for the future, this issue remains top of mind.

“Artists get a bad reputation most of the time. We’re stereotyped to not have the financial backing that traditional businesses do, and sometimes the artist brain isn’t geared to be an entrepreneur,” he says. “Which is why organizations like Artscape are so important. They took a chance on us 20 years ago and look at what we were able to accomplish.”

Leveraging art and culture in the city as a catalyst for urban and community development continues to be a priority for Artscape, and supporting the work of local artists should always be top of mind. Artscape continues to strive for new opportunities, but wants to also celebrate the opportunities afforded in the last 20 years within the Distillery District.

We encourage you to support the artists in the Case Goods Warehouse this holiday season, and beyond that.

A message about the new COVID-19 measures

We are excited to announce SUMMIT, a two-day event for Toronto’s creative community happening on…

This June, we celebrate the theme of ‘innovation’ – a term of great significance in the creative sector.

Our CEO @gleereynolds, featured in the Toronto ed. of INNOVATE™ - a publishing series dedicated to sharing the stories of global thought leaders.

Toronto Artscape Foundation is proud to present FOUNDATIONS: An Evening with @zenesoul and Jared Daniel.

Join us on June 14th for an intimate evening, with performances from two artists from our RBC Launchpad Music Entrepreneurship Program.

Don't forget! Buy your tickets for tomorrow's event: Foundations, an evening with @jaredcdaniel and @zenesoul, at @DanielsSpectrum.

Tickets are $75, which includes a $50 tax receipt, w/ beverages and snacks included. Anyone < 30 can access $25 tix w/ the promo code TWENTYFIVE.

Toronto Artscape Foundation is proud to present FOUNDATIONS: An Evening with @zenesoul and Jared Daniel.

Join us on June 14th for an intimate evening, with performances from two artists from our RBC Launchpad Music Entrepreneurship Program.